All Gone to Look for America

All Gone to Look for America

On Saturday, June 29, 1968, Perry & I decided to run away from home.   He was 18, I was 16.   It wasn't a random decision, so much as a desperate act, seemingly the only solution to my problem, at the time.  Perry and I were in love, had been going together for a few months, and he wanted to protect me from the physical and sexual abuses I had been subject to, throughout my childhood. He didn't know any other way to do it than to remove me from the situation.  Back then, there wasn't the awareness of abuse that there is now. I had gone through my childhood knowing that if I told anyone about what was going on, my father would kill me - as he threatened to do many times. Even with that threat, I had tried to tell a few adults through the years, but no one believed me.
Perry and I had about $30.00 on us, pooled from my babysitting money, and money that Perry had.  At first, we just walked from Inverness drive, where I lived, out to Skyline Boulevard, where we tried to hitch a ride to San Francisco.  After about 30 minutes of no takers, we walked through Serramonte, and Colma, CA. (Land of the Dead), and on to Daly City, where we hopped on a bus to San Francisco.  We wandered around the City for awhile, before boarding a bus to Berkeley.  It was in a women's bathroom in Berkeley where we spent the night, sleeping on the floor, hoping that no one would try to use the restroom. I plugged up the hole in the door - there was no knob, just a hole - with my nail polish bottle.

The next morning, we went back to S.F., looking for cheap eats - a couple of bananas and Hostess cupcakes, washed down with a shared Coca-Cola (Perry's drink of choice). We each wrote a short letter to our parents, to tell them that we were o.k., that we left voluntarily, and mailed the letters.  Those letters were received the next day, after my mom had the police combing the beaches, looking for my body.  Of course, I didn't know that then.

Perry kept mentioning that we couldn't get far without finding jobs and a place to stay.  We were obviously not thinking too far ahead! We went to the Greyhound bus depot on 7th street, and saw a map of destinations on the Greyhound route.

Perry said: "Pick a place!", and I closed my eyes, and pointed to a spot. When I opened my eyes, it said: "Fresno".  So, that is where we went - it took most of the rest of our money. 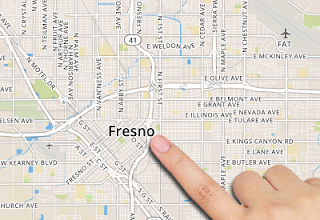 Riding the bus, we somehow had faith that we could find employment - I am not sure how - and would make it on our own.  We thought of Simon & Garfunkle's "America" - which became "our" song - I think the part about riding the bus clinched it.

We were in love, and on a great adventure!  I felt freer than I had ever felt, away from the pain and threats of abuse.  Once we arrived in Fresno, however, we looked around, reality hit, and we knew that we didn't want to stay there.  It was hot, and I remember a large insect crawling around in front of the bus depot, larger than any in our area.  After checking out the local park, and buying a snack with our pooled change, we got back on the bus with our used tickets, winding up in the back.    We thought that if we faked being asleep, we wouldn't be noticed - and we weren't - all the way to downtown L.A.
While this was happening, my sister Laurie wrote in her diary: "Sunday - Debbie ran away from home or something. She hasn't been home since yesterday. She is with Perry. I'm very worried, and I hope she gets home soon.  I'm so mad at Debbie right now. They had $26.00, and can't go far on that. But how can they be so inconsiderate of the feelings of others?"

There wasn't much in downtown L.A. around the bus depot.  It was a pretty depressed area.  We scoped out an old wrecked car yard, looking for some sort of shelter.  It was hot, and we were tired & hungry.  We noticed a police car slowing down, and then following us.  We tried to ignore it until a half-siren went off, with flashing lights.  Two officers got out of the car and asked us what we were doing. I don't recall what we said, but whatever it was was enough for them to have us put our hands on the squad car, as we were frisked.  Handcuffs were then put on us, as we were told to "...get in the car".  Perry asked what the charges were, and one of the officers replied that we were loitering, which was against the law.  We were scared, and in shock, I think.

Once we arrived at the police station, we were separated and questioned.  A female officer dumped my purse out onto a desk, looking through it (for drugs, presumably). She found a packet of love letters from Perry that I kept with me, and started to read them aloud, laughing. After everything was put back in my purse, and using the restroom (where I toyed with the idea of escaping - but couldn't),  I was then put in another squad car, where I was taken to L.A. County Juvenile Hall.  I asked about Perry, where was he going?  The officer said that since he was 18, he was not a minor, so he was let go, with a ticket for loitering.  I later learned that Perry had been told to leave town, and not look back, and that if he tried to contact me, they would slap a statutory rape charge on him.   While he was hitch-hiking home - a process that took a few days - I was kept in Juvenile Hall.  After a couple of hours sitting in a waiting area - I tried to use a key to pry the window mesh apart, with no success - I was frisked and searched, then told to strip & shower.  I was then put in a room with about 20 other girls, where we slept on mattresses on the floor. I cried all night, wondering and worrying about Perry.   Even though I had not eaten much for 2 days, I had no appetite for the dinner served that night.

The next day, I had to attend classes for awhile, until being called to the matron's office.     I needed to get home, find out what was going on with Perry.  I was afraid for him, so had finally given the matron my family's contact information..  The matron called me to her office, and said that my mother had bought a plane ticket, and that I was to be transported to LAX. I was so happy, and the matron was happy for me.  They gave me a dress and a half-slip to wear - I am not sure what happened to my original clothes.  I still have the half slip: 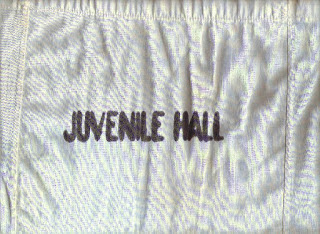 Laurie wrote in her diary:"I had fun getting Debbie's ticket at the airport", the day before I arrived home.  The next day, I had my first on an airline. Arriving at SFO, my mom found me, and brought me to the airport's diner, where she bought me a hamburger and milkshake.  She wondered why I left, and I just mumbled something about needing to "get away".  I asked her about Perry, and she said that no one had heard from him. I was worried and scared, feeling helpless.   Laurie wrote: "Tuesday, Debbie came home on the jet, and Perry wasn't home yet. I was worried about him."

Two days later she wrote: "Perry hitchiked home. Debbie's happy".   I went to see him, and he had lost a bit of weight, and was badly sunburned.  He held my hand, and quietly said: "We won't be doing that again, will we?"

A few months later, Perry and I broke up for the first time in our relationship, reuniting again in 1970.  That little episode would become a part of our story.  We would have other adventures, marry and have a daughter, then divorce after 30 years of marriage.  We remained friends for 15 more years, until Perry died, on June 5, 2016.  We often reminisced about the crazy things we did when we were young, including our running away, that summer of 1968.

My father's abuses continued into 1969, until I finally told my mother the truth about what had been going on all those years.  Though that didn't stop him from raping my younger sister once, or the physical abuses, the rapes for me ended in 1969.  Unfortunately, Laurie's life ended that year, as well....but that is a story for another blog.
Posted by DebHaglerWong at 9:07 AM