Last week, my husband Michael & I were driving around in Daly City. I was photographing one of the Daly City signs, and its logo: "Gateway to the Peninsula", for an assignment for a local radio station's website. I suddenly had the urge to visit my grandparent's old home, the one where they lived during much of my childhood. 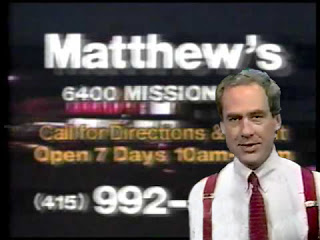 So, we went to 50 Theta Avenue - where my grandparents used to live. It is a block from where the old Matthew's TV & Stereo City, "6400 Mission Street, Top of the Hill, Daly City" store was located, the one where "Mr. Steven Matthew David" did the t.v. and radio announcements.

As soon as I saw my grandparent's old home, the memories flooded back. This is the shot that I took of 50 Theta Avenue, as it looks today: 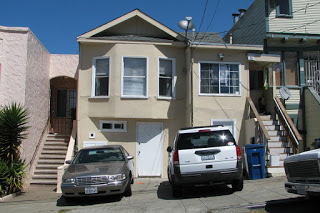 My grandparents lived on the first floor. My Aunt Marie (my Grandma Bowen's sister) and her husband - known only to me as "Uncle Bro" - owned the building, and lived on the top floor. Their children, my second cousins Judy & David, lived there, too.  David's room had a collection of those lighted beer signs....that's all that I recall about his room. Cousin Judy had long braids, and was very pretty.  Laurie & I were in awe of her.
Downstairs, I remember my grandparent's home better.  Their kitchen area was small, but cozy. Their bedroom was adjacent to the kitchen, in a common area, with no doors.

Here are my grandparents when they lived at 50 Theta Avenue: 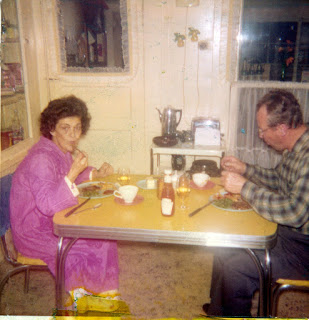 When my sister Laurie & I were visiting my grandparents, we helped Grandma hang the laundry on the lines in their backyard (see that door in the above photo? That door led to their pantry & laundry area, where the washing machine was located - then another door led to their back yard). We would pull on the clothesline, to bring in the dry laundry, and we then placed the clothes pins in a canvas sack attached to the line. The clothes always smelled so clean & fresh, just like outdoors.  Is this done anymore?


Most of what I recall about my grandparent's bedroom is wooden furniture - a tall bureau with objects that I couldn't reach; a few photos on the wall, a cross, a picture of Jesus with a flaming heart, various family photos, and of course, my grandmother's dresser, which had a round mirror, half-circle shell-shaped handles, and was covered mostly with containers of her favorite fragrance - "Evening in Paris." The majority of these bottles, jars and boxes were gifts to her from us.  Grandma was easy to purchase gifts for..... Evening in Paris. 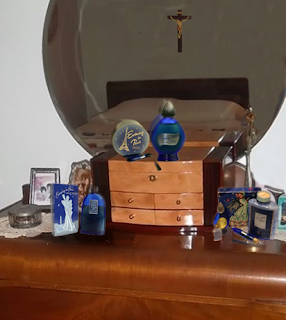 Grandpa used Old Spice,which was left in the bathroom, or possibly rested on top of their  highboy dresser.  Not sure, because I was too short at the time to see that high up. My aunt Annie - Steve's wife - sent me this picture of that same dresser today - matches my memories perfectly! 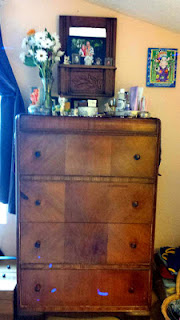 My Uncle Steve lived with his parents, my Grandma & Grandpa Bowen, all of the years that they lived there.  My grandma, Lillian (Gladys Wayne) Bowen, cleaned their home into a well-ordered neatness every day. She had nervous energy to spare. Just as you entered Steve's room, to the right, was a glass cabinet, containing his awards and trophies for various accomplishments. A football was placed in one corner on top of the glass cabinet, sharing space with more trophies.  The walls were lined with sports pennants, school and San Francisco teams. The bed was neatly made,covered in one of those 1950s-era cotton cowboy-and-horses-design, tan bedspreads.    On Steve's bed rested an old, brown, well-used teddy bear, placed neatly in the pillow crease of the bedspread. Steve's Communion photo rested on a dresser. 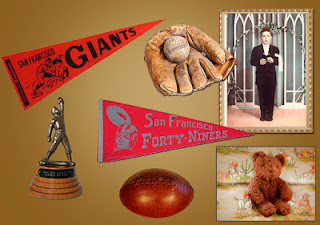 That same brown wooden dresser also had a pair of bronze baby shoes on it, along with a neatly-stacked assortment of comic books, and a baseball mitt. There were two shelves placed at each opposing corner of the walls, with other objects of Steve's school and recreational activities.

But even as a child, I could sense that Steve didn't arrange this room himself. He was involved in so many activities, that he was rarely at home. He was almost a myth to us by then, even though he was only 2-1/2 years older than me. Steve was always involved in heroic achievements.  He had aspired at one time to be a fireman (he later became a volunteer firefighter in Garberville, CA.).

Laurie & I were visiting for a week during Spring Break one year (known back then as "Easter Week"), when a fire broke out across the street.  Grandma cried: "Oh, I'm glad that Steve isn't home right now! He would be breaking into that home, trying to rescue our neighbor!"  The "neighbor" was disabled, and was saved by the firemen when they got there. Steve would have run right into her home, without a thought, had he been there. His character was such that he wanted to save the world, if he could.  When he volunteered - at 16 - to fight in the Vietnam war, we weren't surprised. Laurie & I wrote to him every month, and received letters from him, when he could respond (I wish I had those letters today). Here is a photo of Steve, who sat long enough to have the picture taken with his parents, when they lived at 50 Theta Ave: 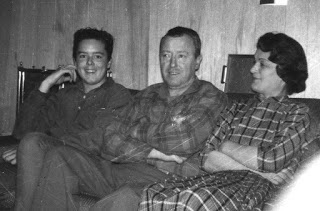 Spring breaks were also when we would accompany Grandpa to the Malt Shop on Mission Street, and he would buy us burgers with tall milkshakes made fresh with vanilla ice cream and chocolate syrup, mixed in stainless containers, then poured carefully into our glasses 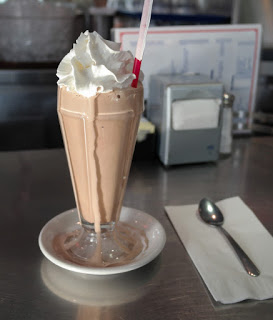 After sipping through tall straws, we would fill ourselves to the brim, and then walk off our meal along Mission Street, to check out the businesses there.

Back at 50 Theta Avenue, we'd play outside- we  left our chalked hopscotch markings on the sparkly sidewalks.  The fragrance of garlic and tomato seasonings beckoned us into the house, where Grandma would pile spaghetti dinner and garlic bread on our plates.  Heaven!

Visiting my maternal grandparents was one of the best parts of my childhood. During Christmas time, on the coffee table was the hard Christmas candy, in a gold-rimmed ceramic, pink, liver-shaped dish (though we were kept from diving into it too soon, by our father). That dish lasted throughout their lives - I recall seeing it last after my grandmother died, in their Milpitas apartment.What you see in my Photoshopped image below is where the picture window used to be. The picture window used to jut out a bit, and there was a place where my grandparents had their Christmas tree each year. Grandma liked to vary the types of trees they had. For several years, there was the the aluminum tree with equally reflective ornaments, accented by the rotating color-wheel - remember those? In other years, there was a white flocked tree, then a pink flocked tree, with pink and silver ornaments. The trees were always surrounded by presents (some of which were ours). I don't have photos of these memories - digital technology, which provides endless images today, was decades into the future.  I'm conjuring in Photoshop what I recall -basically, that is where the picture window was: 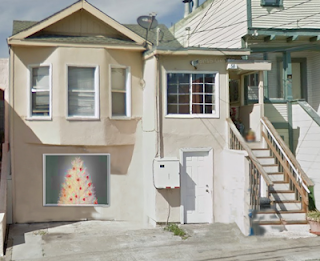 The merriment of the season was celebrated on both levels of the duplex, as we were allowed to go upstairs to our Aunt Marie & Uncle Bro's home.  Often, my grandmother's siblings and their spouses would join them - with names like Uncle Fat, Big Boy, Syl, Buck, and Tiny, nicknames or truncated names were used more often than not, in the Wayne & Bowen families. My mom was "Sis" or "Sissy",  Grandma was "Lil", and Grandpa was "Kels".   There, the adults smoked cigarettes and drank egg nogs or Tom & Jerry's, in appropriate glassware for the occasion, talking loudly through the evening, obviously enjoying each other's company.

I recall once that that Aunt Marie's tree was a live tree, with varied ornaments, and I would press my nose into its needles to experience the fragrance of Christmas. The glass ornaments were fun to look into, my distorted image peering back at me, some frosted with glitter. Other painted wooden ornaments carried the names of my cousins, creating a wonderfully homey effect. I would feel most secure, surrounded by happy adults, during these occasions. These were some of my best childhood memories, surrounded by cigarette smoke and laughter.  As the evening wore on, Aunt Marie, by now in her cups, would promise us lovely gifts from Santa, or (in later years) a car for each of us in the color and make of our choosing.


These are the memories that I want to leave with all others in my family, so that they could know this part of their heritage. Just one part, my part.  I know that they have their own.......including my cousin Judy, who also lived at 50 Theta Avenue, upstairs from my grandparents. Here is her response to my blog:
"Debi, how beautiful.  By the way, Tiny was Uncle Fat's wife and she was always very thin.  The large lady was Aunt Edna who was your Grandma's sister.  I will always remember visiting Aunt Edna and Uncle Syl.  Their bed had two long lumps where they both slept all the time.  Formed by their weight. They were such happy and wonderful people. Your Grandma, Lilly, as I called her, was my favorite.  She and my Mom always went places together.  Did you know that your Mom got me a job with her doing keypunch.  We worked together at nite and during our lunch we would go to a bar around the corner and have a drink. Just one and back to work.  Sissy was like a big sister to me.  She helped me find my first doctor that she also used.  I also remember the house you grew up in.  We called them the Barn Houses as the way they were built.  I did mention to you, your Mom hit the Pacifica Newspaper when she lost the brakes to her car and safely drove down a steep curved street with you all in it.  It was quite a story.  I'll have to get back to you when I have more time to see if I have pictures and maybe more stories.  Hope your feeling better. Thank you so much for those lovely memories.  50 Theta is a big part of my life also.  Hugs to you."
Posted by Anonymous at 10:04 AM No comments: