When you're a child, you don't know any better.   We lived in a violent household, but thought that was normal. My father beat his children, and raped his daughters regularly.  When I was 10 years of age, I was hospitalized to repair the severe damages from one of the rapes.  Various forms of torture were also included.  For now, though, I'm just talking about the violence.

When your father beats you on a regular basis, you hate and fear it, but know that it is a part of life. It was also a large part of our continued underlying anxiety, growing up. Being punched, kicked, thrown against walls, having hair pulled, and subjected to spankings defined a painful part of our existence.  There was never a question of IF we would be beaten, but WHEN.

The majority of the time, we didn't do anything wrong, so we couldn't really "prevent" being punished, or predict when our day would turn sour and terrifying.  The beatings were an excuse for our father to let off steam, so we became his little punching bags.

Appropriate, I guess, considering that my father was once a Golden Gloves boxer.  We used to watch him box, back in the early-mid 1950s, on our little B&W t.v. set. Later on, we were made to watch the Monday and Friday Night Fights.  His Golden Gloves, meanwhile, retired to the big storage closet in the hallway. 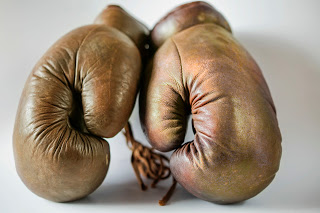 There were other, more serious abuses through the years, but I don't want to go off-topic.  Meanwhile, my father's children all learned to box. 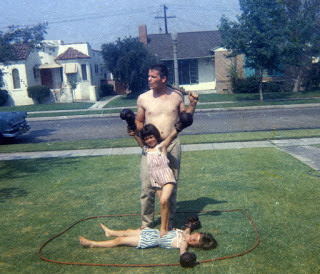 We were made to put on the gloves, and spar, learning to jab with a left-hook, how to get that uppercut in when your opponent was off-guard, the cross punch, etc.  I guess this was to help us learn to protect ourselves - that could be a good thing. But what we really needed protection from was our FATHER.

In any event, we learned violence from the time we entered the world.  When the neighborhood kids would beat up on our siblings, Laurie & I would beat up the bullies.  Arlo later told me that I was doing him "no favors" when I would beat up the kids who beat him up.  It just earned him more derision, that he "...had to have his sisters defend him".

I used to get sucked into fights in grade school.  There was one notable fight in the school yard, where my opponent was at least a foot taller than me. As I was flailing away with my punches, he mostly just slapped me, and held me back.  I was too stupid to realize that he probably could have decked me with one punch, but since I was a girl, that might not look good for him.  As it was, a teacher broke up our fight, pretty much telling him that it was wrong to be fighting with a girl, and wasn't he ashamed of himself?  Since I was the one who said: "Call you down!" in a fit of rage, I felt slightly guilty that he was the one who was made to sit in the principle's office, and I was made to look like the victim.

Rage.  I had a temper, with rage fueled by violence done to myself and my siblings.

Hitting and punching were accepted forms of communication in our house.  Since I was the eldest of 9, I was the enforcer when one of the youngers complained about another sibling who was beating up on them. I had to then kick the offenders' butt: "Stop hitting Sue! If you do that again, I'll hit YOU!"    This usually worked on a short-term basis each time, until my brothers grew taller and stronger.  Big sister had to resort to other methods of "discipline".  Once, I was so upset with my brother Tom's bullying, that I threw a chicken at him that I was stuffing for dinner. 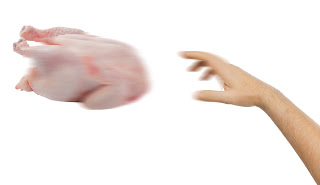 Stuffing all over the floor - no harm done, but I had to revise my methods of keeping the "peace".

"Peace" was the operative word beginning at age 14, when I spent a lot of time with my hippie friends.  The rules were changing, we didn't want to live as our parents did, etc.  Living in peace was a goal to achieve, though something not that simple for one who was raised in violence.  But I was willing to learn about PEACE & LOVE! 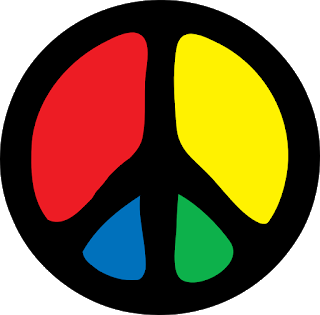 I wasn't the only one who had trouble maintaining that philosophy.  During a peace rally in SF in 1967, as we were holding up our "Make Love, Not War" signs, one of the marchers turned to another, and started hitting him with him with his peace sign. They'd had some sort of philosophical disagreement.   True story.  The irony was not lost on the rest of us.  I heard one woman cry out: "Let's split this scene, Melissa - bad vibes!!!"

I had a child when I was young, who, for the most part, was treated well (in my view), but there were a few times when in frustration, I hit her, and even used my fists on one occasion.
She was a teen, and arrived home hours late. No excuses, but I had been terrified. I fell back on what I had been taught, and castigated myself later - over and over - for my actions.

The majority of the time, however, I turned my rage and frustration inward, resulting in panic attacks, phobias, and hypersensitivity. I was a lot of fun to be around!

I guess I shouldn't feel too bad - John Lennon himself was a violent man, before he preached "Love, Not War".  He wrote songs about threatening to kill his girlfriend, if she "looked at another man".  But then, he met Yoko. 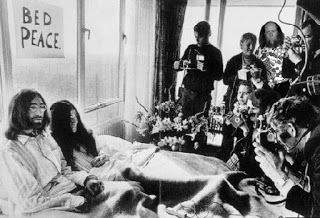 It's tough finding that middle ground, in real life.  Few of us are Gandhi or Mother Teresa.....but we can learn...can't we?

It was 1959.  My sister Laurie and I were going to celebrate our first Holy Communion.  We had the veils and dresses (itchy), and had enough Catechism points to qualify for our First Holy Communion at the Church of the Good Shepherd, In Pacifica, CA.   My mother even had professional portraits of us in our communion dresses; she also brought along our baby brother Joe, to have his portrait taken. Professional portraits were serious and rare back in those days, just for special occasions. Joe was thrown in for good measure, as my mom had to bring him along, anyway. 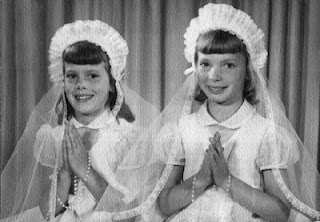 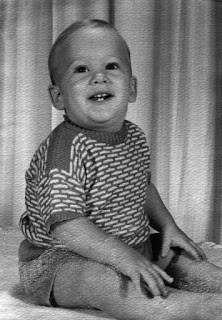 For Catholics, celebrating ones' First Holy Communion is one of the required rites-of-passage to being a good, practicing Catholic, along with baptism and confirmation).  Holy Communion is a Christian rite that is considered a sacrament in most churches, originating with Christ at the Last Supper.
We felt pretty important, for that short period of time.  What was even more special were the gifts from Armand Greenfield, our neighbor.  Armand was single man, who lived in the house catty-corner to us, on Inverness Drive.

Armand was also Jewish. The significance of this would not be appreciated until I was an adult.  Before we went to church on that Communion Sunday, Armand gave Laurie and I each a Stanhope viewer Cross necklace, as a celebratory gift.  I was honored and touched that he (or anyone) would do this.

For those who do not know what a Stanhope viewer is, here's a short description:
"Stanhopes or Stanho-scopes are optical devices that enable the viewing of microphotographs without using a microscope They were invented by René Dagron in 1857. Dagron bypassed the need for an expensive microscope to view the microscopic photographs by attaching the microphotograph at the end of a modified Stanhope lens. He called the devices bijoux photo-microscopiques or microscopic photo-jewelry." 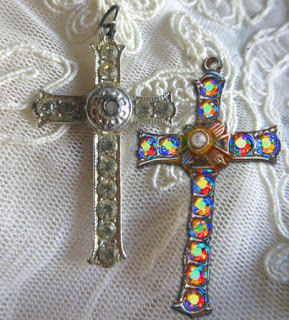 The one that I was given was covered in colorful rhinestones, with the "Hail Mary" prayer  inside; Laurie's was a beautiful gold with white rhinestone cross with the Lord's Prayer, which you could read inside the peephole in the middle. 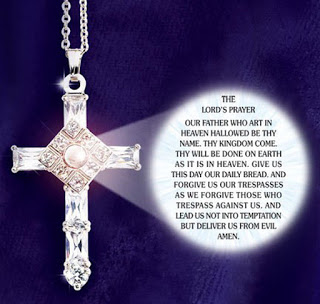 I was extremely touched that, at 7 years of age, anyone would think of us this way.  We were not used to having that kind of attention, especially from a grown man who didn't want anything from us; he just wanted to give a gift, with no expectations or conditions.  We treasured our crosses; I wore mine to my First Holy Communion, feeling very elegant, indeed.
Thinking back, I wonder what happened to those crosses, and to Armand Greenfield. So much has occurred in the 58 years since I celebrated my First Holy Communion.  But the memory of that gift is as sharp as the cut on those rhinestones, and the significance appreciated far more now than it was in 1959.
Posted by Anonymous at 9:51 AM No comments: