Recently, I got a renewal notice for my annual contribution to KMUD radio station. This is something that I contribute to, every year....it was one of my brother Arlo's last requests of me.   Arlo passed away on October 5, 2002, at the age of 48, from stomach cancer. 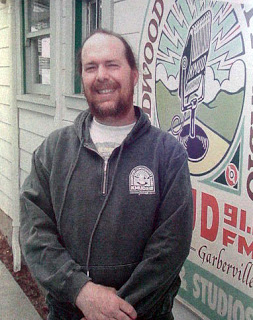 Arlo started KMUD radio in the mid-70s, as little hole-in-the-wall station, a dream of his since we were kids, building superheterodyne receivers from scratch, on breadboards (I can still smell the soldering fluid burning on the components), and then listening to XERB radio in Tijuana with Wolfman Jack's scream "XERB" in his gravelly delivery...but I digress.

Arlo accomplished quite a lot in his 48 years, in spite of his beginnings, which were rough.  I won't go into details, as they were also my beginnings.  Suffice it to say, he overcame a great deal to realize his goals and his dreams, one of them being a little radio station of his own, which grew into what it is today.  He was instrumental in bringing many music acts into Humboldt County, and organizing events like the Kate Wolf Music Festival (now performed in part on the Arlo Hagler Memorial Stage - yes, my brother has a music stage named after him).
All of that is only an example of Arlo's contributions.  He was heavily involved in cleaning up the environment.  He worked for the Southern Humboldt Recycling Center, while hosting KMUD's Environment Show, with issues ranging from cleaning up our oceans, to forest destruction to be dealt with.  Saving the redwoods was one of his prime concerns, and he was instrumental in helping save the Sinkyone Wilderness from clear-cutting and development.  The the concept of clean energy was also a favorite topic.  It was on KMUD radio that Julia Butterfly's story first broke, the "girl in the tree" - who, for 738 days, lived in the canopy of an ancient redwood tree. She was called Luna, and wanted to help make the world aware of the plight of ancient forests.  She and Arlo were friends (I think he had a serious crush on her), and they shared a common mission.   So, there was more than entertainment in his programming - updates on community news, activities, environmental concerns and how his listeners could help, etc.   With his soothing deep voice, he kept his listeners tuned in.  My mom loved the show, never missed one. 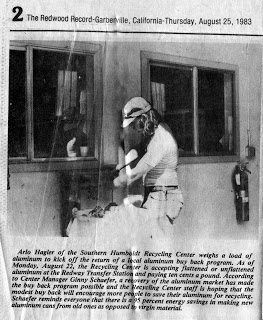 Arlo was the community's electrician, board certified, with his website "Watts Happening" to advertise his business (Arlo's Music website was called "Random Axxes", long before the television show "Random Axxes" came about).  The logo on his website was a dinosaur animated gif, with the line:"Dinosaurs Welcome".

He was excited about the possibilities of the internet, especially for artists.  It was the most positive take on what was considered the new frontier, when he wrote:

"This site is a companion to my radio program, RANDOM AXXES, aired weekly on our local community radio station, KMUD. The idea behind this web site is a simple one: to put the listener directly in touch with the artist(s). If there's something you heard on my show, something you like from a band you've never heard of, you can visit this site, find the song list for the show in question, and follow the link to that band's web site, or one of the web sites dedicated to that band (Often a fan site will be better than the 'official' site). Whenever possible, I encourage you, the listener, to buy direct from the artist. An ever-increasing number of musicians are taking to the Web, releasing  albums old and new through their own independent labels, thus bypassing the corporate record companies, commercial hype, and other barriers.  I see this as one of the highest possible uses for the Internet; Grass-Roots Cyberdistribution. Music by, and for, the people. That's the idea. Or maybe it's only Rock And Roll...Arlo Hagler"

There was music and the station - which didn't pay in money - and then, there was his "day job", as an electrician.   Below:  A screenshot of Arlo's "Watt's Happening" website, which he created himself, leading with a line by Hunter Thompson, "Electricity is neutral. It doesn't want to kill you, but it will if you give it the chance." 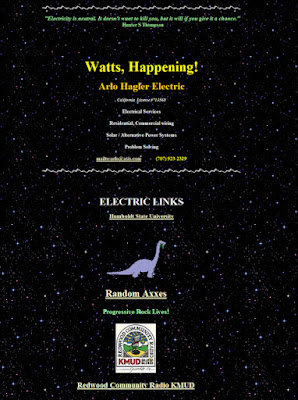 At his memorial, I actually heard one tearful mourner who was going to re-wire her house or repair her appliances, now that Arlo was gone? That memorial was huge, held at Mateel Center in Redway, truly a Celebration of Life that went on for two days, with music, tributes, festivities, along with clouds of the "good stuff" wafting about.

The memorial actually started out as a benefit for Arlo while he was still alive, to help make expenses - Arlo had no medical insurance, which is part of why he waited so long to see a doctor about his stomach pains.  Always stoic - something we were taught to be - he took Rolaids, hoping the pains would subside. After he died, we found Rolaids and other antacids lying around his home. 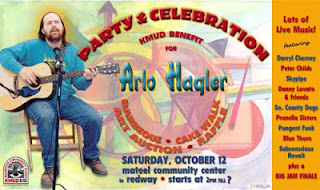 Arlo was a performer himself, starting out in grade school, doing a solo of "Blue Moon" in our elementary school auditorium...that took guts!  He was brave, and seemingly unconcerned with the snickering of some of the kids.   Eventually, his voice changed, he took up guitar, and did some performing that actually earned him some money.  Not an egotist, he invited others to participate, and was great at promoting the work of many other artists.  If artists were going to have a performance - music or otherwise - in Humboldt County in the 70s-2000, "Random Axxes" was one of the of ways to announce that show. He also interviewed many musicians and others in the business.

When Arlo started out, his Garberville studio was barely the size of a broom closet, filled to the max with cassette tapes and records.  I took a pic of him during his show, as we were already anticipating the move to a larger studio in Redway.

As I look at KMUD's program line-up today, I see many changes from 12 years ago, only recognizing the "JoMama's Blues" slot.  The station has grown.  Arlo would be proud.  The last time I saw him - to say goodbye - he was concerned about the station, among other things.  He had so much left to do, he wasn’t finished, he told me.  Would KMUD survive?  Would his efforts towards improving our environment carry on?

Something I have never mentioned before, but appreciate as much a anything is Arlo's devotion to his family, in particular to our autistic brother Mark.  When everyone else was too busy or couldn't make it, Arlo visited Mark, took him out to eat, and met with Mark's caretakers.  He checked up on Mark regularly. He was there for my mom, who lived close by, and the rest of our family.  I'm sorry to say that we may have taken that for granted, as we never thought he would leave us.

My annual donation to KMUD is one of the small ways in which I contribute.  I think Arlo would be very happy that KMUD is thriving.  Arlo's dream lives on in the station that he started, through in the efforts of others who share that dream.
Posted by DebHaglerWong at 9:43 AM