I was a Santa's Helper for Macy's, many years ago, where one of my jobs was to take the photos of children with Santa.   One requirement was to have the child AND Santa looking at the camera, simultaneously.   Eight times out of 10, as soon as the kid was put on Santa's lap, the crying ensued, and, in more than a few cases, this was accompanied by screaming.  The Santa that I worked with was a 21-year-old blonde surfer, who filled out the Santa suit in the shoulders, but had to wear padding over his belly to complete the effect. He was continually tugging on his beard and belly, as both kept shifting.  He was cheerful, though, and that disposition helped when he got peed on a few times by terrified toddlers.
My duties included escorting the child to Santa’s lap, then taking the photos, processing the orders, and giving the child a candy cane on their way out.  The camera was located inside of a large candy cane enclosure, I guess to disguise it, but also made my job a bit clumsy. 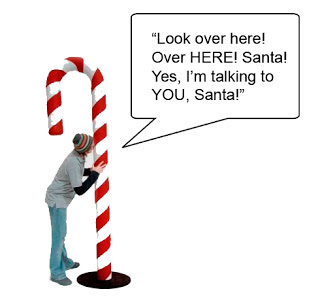 The photos were not the Polaroids that other malls used, but actual 35mm photos that the customers would receive later on.  Getting Santa and the child to look at the huge candy came was not always easy, but we survived it.

My first husband Perry played Santa for the mall a week later, so when we got our paychecks, we found that Santas get paid a lot more than helpers, even though helpers actually did more of the work.  There’s a lesson in there, somewhere. One bonus was that I got a free photo session for my 4-year-old daughter Kelly, with the Surfer Santa.  She knew to smile, as Mom was behind the candy cane camera. 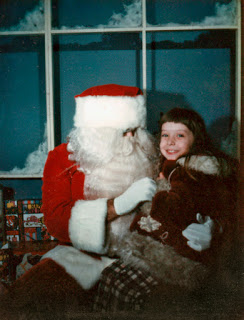 A postscript to this story is that "Surfer Santa" was fired, because he was found emerging from the restroom in his costume, sans beard, smoking a cigarette.  The supervisor was none too pleased, as this cast a bad light on their reputation. Not sure what the big deal was...didn't Santa smoke a pipe? In any event, he didn't seem unhappy about being let go. 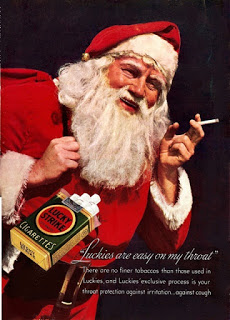 Another Christmas, I lit and decorated Christmas trees for Macy's. Sounds fun, huh?  I had to take a class in lighting the tree, the “Sylvestri Way”, wound from the base, and around from the back of each and every branch. 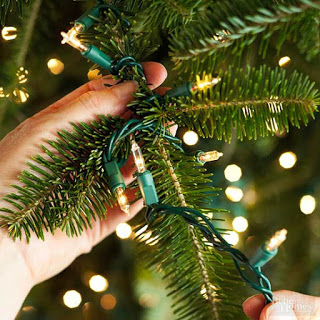 All of the trees were artificial, which helped, and I did a decent job of it on the first tree, following the directions of our instructor. But when I returned to work, I was given 3 flocked trees to work with, where visibility of the branches was obscured, and everything had to be done by touch.   There were several other "stringers" who got the standard tree. One had objected to doing the flocked trees, as she was "allergic to the flocking".
Making a difficult situation worse was that if the string of lights went out, everything had to be unwrapped and removed, replaced by a new string.  After three days of clumsily struggling to decorate these trees, my belief in miracles was assured, because those trees actually wound up looking pretty good! 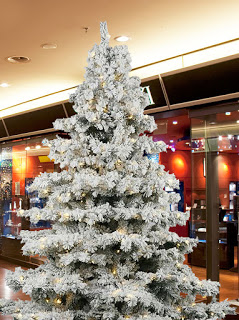 I, on the other hand, had looked as though I had been pooped on by a snowman, and as I walked through the mall at the end of the day, just wanted to get the flock out of there!
Posted by DebHaglerWong at 9:32 AM