My brief hairstory:  At some point in my early 20s, I decided to let my "freak flag fly", and stopped cutting my hair.  I was curious to discover how long it could get.

After a decade, my hair reached as far as my knees.  Most of the time, I wore it in a braid, or braids, just to function without it getting in the way. 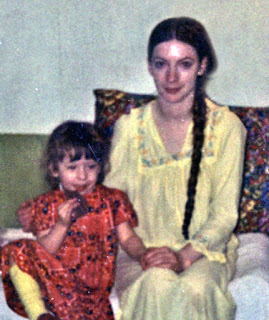 Other times, I let it hang loose. 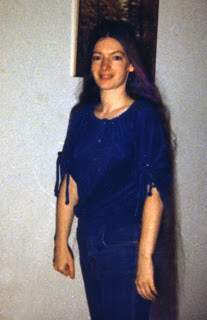 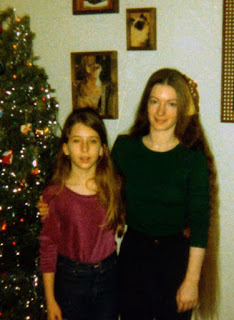 My husband Perry also had a lot of hair, but while mine grew down, his grew OUT! 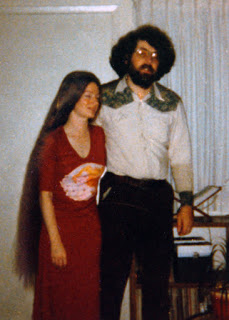 I walked everywhere, and got a lot of notice & compliments on my hair. Others wondered if all of that hair was "too heavy" on my head, and how long it took to dry, after washing it?
I also received some snide remarks. My brother Arlo called me:  "Cousin It".  One day, I walked down the street, and some teens yelled out from their car: "Cut yer fuckin' hair!" 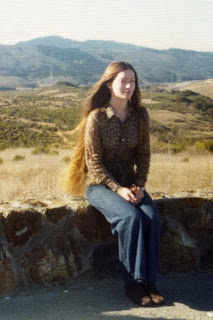 Then there was the time that my hair got stuck in a man's shirt button, as we were passing each other in a narrow pizza parlor hallway.  It took a few minutes to extract the tendrils from his button. He chuckled, and was kind enough to put up with it. My hair also caught on door knobs, and I sat on it a few times, yanking my neck in the process. I cut my bangs in my late 30s, trying for a different look.

For at least 10 more years, I kept the bangs, as evidenced by my work photos here
. 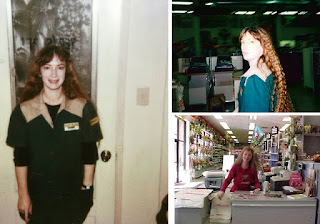 My hair is naturally straight, but because I had to keep it braided most of the time, it was wavy when "let out". 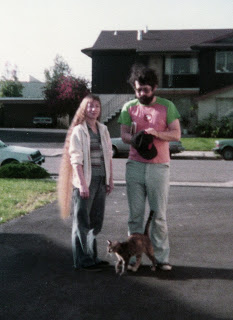 When I was in my late 40s, I dyed my hair, as per usual, wit "Nice 'N Easy" hair dye.  Unfortunately, I was allergic to the dye at that point.  My scalp tingled, then itched, then burned.  By the time I made the shower, half of my hair fell out.

Some of it grew back, but not all of it, leaving me permanently bald in spots.  Now I wear a hat when in public most of the time.  One of the many lessons about "loss" in my life, but, after all.... it's just hair!
Posted by Anonymous at 1:10 PM