History is the recorded story of our species - it has always been an interest of mine.  Family history is personalized, and even more interesting.  Native Americans passed their stories down through the generations, written & verbal.  That is a tradition which we all could benefit from.

I believe that each of us is writing the story of our lives.  Every day, we write a new page, until our last chapter. If we are not famous enough to make the history books, one way to achieve immortality is through our genealogical records and stories. 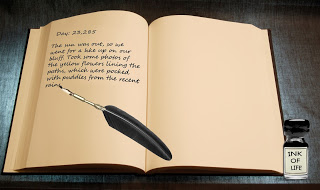 My parents never talked about their ancestors.  Living for today, which is what most of us have to do, consumed their lives.  There were very few stories about their origins, save for when my grandfather got drunk, and spilled all about our Cherokee great-grandmother (later found this not to be true), or his friendship with Ima Hogg, Texas royalty (possible). 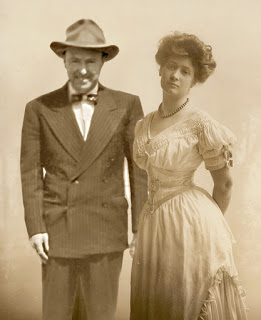 For almost a decade, I have worked on my family tree, reaching back in some places to the 1100s. There have been fascinating discoveries.  One branch leads to another...to another...etc. I have discovered that I have Revolutionary War ancestors (4 verified direct lineage veterans) and Civil war (3 verified), and many in succeeding wars. I don't think this is because I come from a war-mongering family.  Military records are some of the best-kept records. 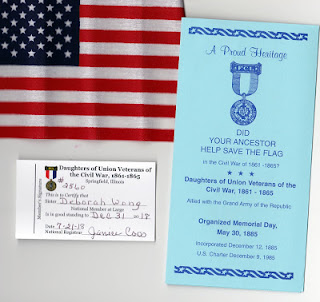 When doing my tree, there were (and are) challenges, but I was helped by so many others related to me who were also keeping records.  Our family, for the most part, has been in the USA for centuries, so it was relatively easy to find information. There is a book about my paternal ancestors called: "Trail of the Haglers", by Travis Jackson Hagler (my maiden name is Hagler), and piles of documentation on Ancestry.com, Fold.com, Newspapers.com, and other sites.  WikiTree.com is a great free site to keep your tree.

It also helps that I have had four DNA tests taken, which are cross-referenced with others who match, and their family connections. This is part of our "DNA Circle".  Right now, I have 29 matches for specific ancestors, through my DNA circle. Example: There is one goes back to Samuel Harrison Bowen, who fought in the Revolutionary War: 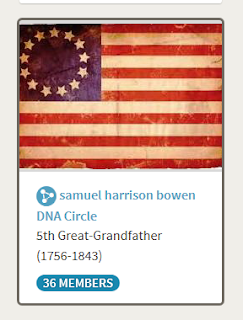 I am even part of a study about genetics and inherited characteristics.  After finding so many farmers in my background - on both sides - I figured that my early-to-bed-early-to-rise temperament was inherited.  This is my great-great grandfather James Samuel Bowen (1861-1923), on his farm in Mt Vernon, Texas: 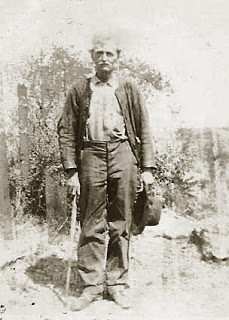 I think I inherited his sense of style, too. 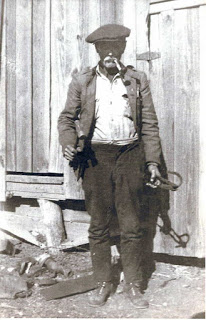 You get the idea. I have a riches of documentation, connections, DNA evidence, and photos.  I guess I got spoiled by that, because when I began Mike's genealogy, I was presented with many challenges, some specific to the Chinese culture that I hadn't anticipated. I decided to work on Mike's family tree, when we weren't sure how some family members were related to the others.

Even though both of Mike's parents were born in the USA, Chinese traditions still hold.  For instance, both of Mike's grandmothers had the name "Shee" in them, which went back to Chinese tradition. I found out that "Shee" just means: "Family of" for women who are married in China and immigrate here. "Ti" is "wife of".  Others whose surnames were Moy (Mei, Moi), went back to the Shang Dynasty, etc. I also found that quite a few members of Mike's family had multiple names.  Name order is reversed for Chinese - surname first, etc.

It is also Chinese tradition to call elders "Aunt" and "Uncle", whether they were blood-related or not. Sign of respect.

Since we didn't do that in my European-background family, it took some getting used to.  I had to also separate out the blood-related uncles and aunts, which is necessary for a family tree which traces back to ones' origins, etc.

I also learned a lot about the Chinese Exclusion Act of 1882, the first significant law restricting immigration into the United States. In the spring of 1882, the Chinese Exclusion Act was passed by Congress, and signed by President Chester A. Arthur. This act provided an absolute 10-year moratorium on Chinese labor immigration.   The effects of that Act on my research is worthy of a blog in itself:
http://haglerstories.blogspot.com/2017/02/the-challenges-of-charting-chinese.html 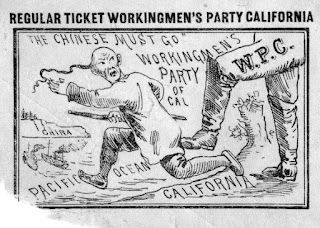 This made it difficult to emigrate to the USA if you were Chinese, but did not stop many - including Mike's ancestors. They had to find ways around the system, to survive here.

Mike's family are some of the most hard-working American citizens I've ever met (or learned about), and many had to fight for the right to stay in this country, one way or another.  They have been resourceful, successful and productive citizens.

Several of Mike's family served in the military,fighting for the USA., including Uncle Pongee, Uncle Warren, and Uncle Richard Tung. Uncle Richard was honored for his service in the 491st bomb group in WWII; here is a link to an article about one of his experiences during that war: http://amarillo.com/news/local-news/2014-11-07/world-war-ii-vet-recalls-dramatic-dogfight 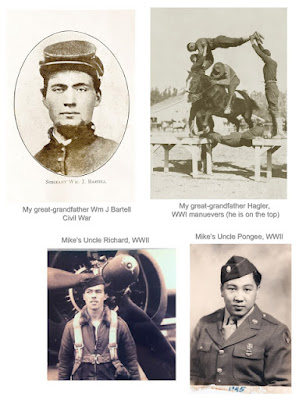 Another challenge in Mike's tree is that Chinese had to be self-protective when entering our borders, which included many name changes, and discrepancies in the ages and other details of those entering the US. Where I could go back many centuries in my own family tree, I am content to trace back 5 generations in Mike's.  That his parents and many other relations were born here made it easier to find records on them, but the clues vanish as soon as I "cross" the border into China-records territory.

However, I was able to contribute photos and stories to Mike's tree on Ancestry, which were provided by Mike's mom, uncle, and other family members. Mike's Uncle Richard wrote his life story, which was a great resource for filling in a lot of the blanks. These are gifts for future generations.

Mike's maternal grandmother Rose was an actress in Hong Kong, and also a beloved citizen in Rock Springs, Wyoming, where Mike's mom and siblings were born & grew up. Rose liked to celebrate International Day by shooting fireworks off of the roof of the family restaurant. 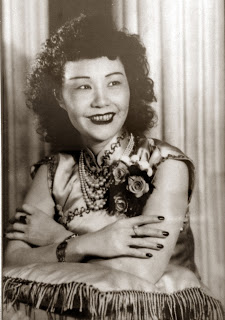 There are many fascinating stories in our families, ones which would make great films. But some family members might not wish certain stories to be made public.
Types of records used in genealogy include birth, marriage, baptism, death, immigration, pension, draft registration and military, school, news stories, census, voter, Social Security (numbers only provided for the deceased), city directories, and records provided by other relations.  My father's family kept very good records. I was able to scan and archive/upload my Civil War Union soldier 2nd-great- grandfather William J. Bartell's records, photos, and documents, such as this roster of his unit: 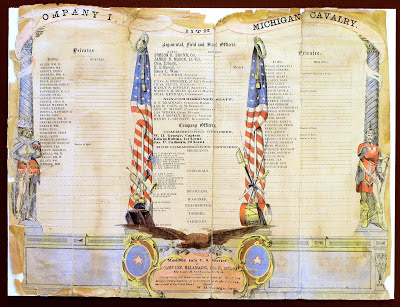 There were also a few Confederates among my ancestors - this from my 3nd great-grandfather Thomas Cox Bowen: 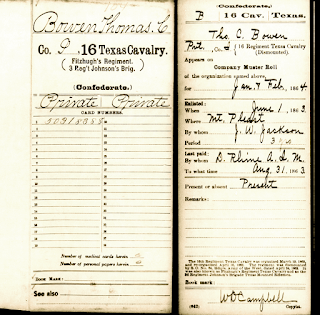 Cemeteries are also a great resource, including photos of headstones of ancestors to add to the tree.  My Bowen grandparents and great-grandparents had the open book theme on their headstones, befitting the "story of life" concept. 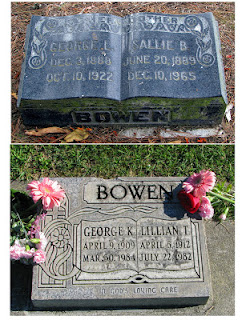 I realize how much the past generations tie into the future.  It is this continuum of life, which flowed through our ancestors' veins, and continues in the succeeding generations, which keeps me going at this crazy "hobby".  At one point, Mike asked me why I was so interested in doing his family's genealogy.  I replied: "Because they're my family, too."
Posted by Anonymous at 9:20 AM