I used to win prizes in dance contests in school, and at the American Legion Hall, Rockaway Beach, Pacifica, CA.  I knew all of the latest styles - the Jerk, Mashed Potato, Twist, Swim, Pony, the Shake, Watusi, the Hully-Gully, and the Funky Chicken...for starters.  I had energy and commitment, while looking like an escapee from an insane asylum, in my performances.


There was also a group participation dance called: "The Madison", which involved numerous people dancing in step with each other, in a long line. That was fun, as there was a team of us dancing in a cool, way, not like the "Bunny Hop" of our parent's era.


In the 1960s, dancing partners were optional, which was a good thing for our pre-high school crowd, because the boys rarely participated.  They either sat in chairs that lined the wall, hung around the iced barrel of soft drinks, or played Ping-Pong, while the rest of us tore up the floor.

The rest of us - girls, that is -  and one or two brave males - usually the best dancers in the school -  rocked the scene with movement.  In our school, the boys were Bill Keach and Alford Patrick.  Here is a picture of me with Alford (he's the dude in the center of the shot), and yes, we were dancing together -  but you can't tell that from the photo.  Truly, we were all really in our own worlds, grooving to the tunes. I'm the girl on the right, with my head turned around.  Who needed to look at our dancing partners, anyway? 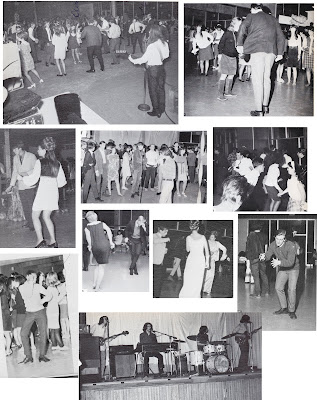 Slow dances were an exception for some of the boys, who either liked a girl, or liked to feel up a girl, or both.  We didn't follow any specific rules. However, I was accused by several male partners that I was "leading", which was a no-no.  I'm still unclear on that concept.

Some of the dance contests were based upon style.  There were others which had nothing to do with dancing technique.  For instance, there was the "freeze" contest, where, when the music played, you froze instantly when the music was stopped.  A pre-pubescent teenage boy who wouldn't be on the dance floor in a million years enjoyed holding the phonograph arm, pulling it up to stop the music at various times, as we dancers became his puppets. 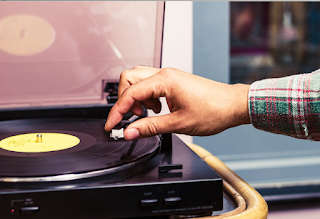 Prizes ranged from school supplies to games or candy, etc.  Once, I won a box of Raisinettes - my favorite candy - and I was THRILLED with the prize......

Dancing for me was always informal - I could never get into square dancing or "Dancing with the Stars" kind of stuff.  It was just a way to express myself when hearing music.  Outdoor or indoor, every dance move I do screams my age.

At my step-daughter's wedding (see below), the moves are familiar.  That is my husband behind me...we didn't have to look at each other.  Same M.O. as in my teens.  I have not progressed in style, just years. 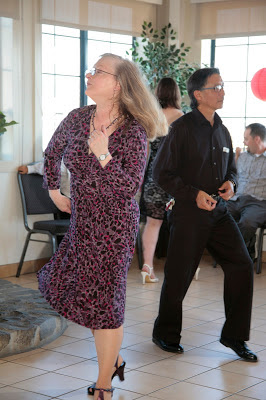 These days, more often than not, I am carrying a camera while dancing. Here I am with another lively soul, at a 4th-of-July event a few years ago(American Legion again - this one in HMB). 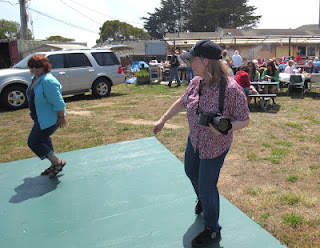 Of course, it helps to dance with someone who enjoys the art of the free-form dance, like Tom here. The ladies love this guy, and why not? He DANCES! 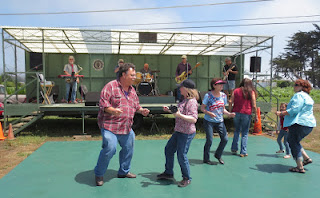 I guess the point is that, even though I lack style, referring back to ancient moves, I'm having fun re-living my youth and also my oldth, shaking more than I ever could have when young. Well........there's a lot more to shake these days!
Posted by Anonymous at 10:06 AM