After I had worked on my own family tree for a decade, I began charting my husband Mike's Family Tree. I did this when someone was asked how certain family members were related to others. No one knew, exactly.

What that led to, in addition to the usual surprises, was an education about the affects of the Chinese Exclusion Act on his family.

The Chinese Exclusion Act was a United States federal law signed by President Chester A. Arthur on May 6, 1882, prohibiting all immigration of Chinese laborers. 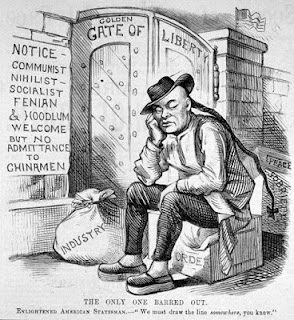 This law was not repealed until 1943 - that is 61 - sixty-one years of what was, in the words of Republican Senator George Frisbie Hoar of Massachusetts "...nothing less than the legalization of racial discrimination."  Even after the repeal, there was a quota of 100 immigrants per year from China, until 1964, when the Johnson administration lifted the quotas.
In addition, interracial marriages of Whites and Chinese was not made legal in the United States until 1948, which affected other members of the family. 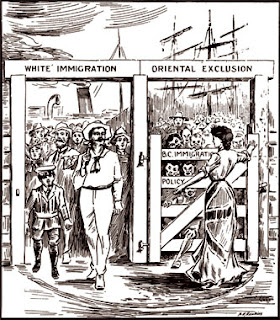 I found that Mike's grandfather Sam entered the US from China through Seattle, Washington, on September 10, 1920, in the midst of this restriction.  He jumped through some hoops, for sure. He didn't want his children to have to go through this experience, so once he was established, brought his wife Law Moy to the United States, and they had their children in Utah and Wyoming.

Ways around the Chinese Exclusion Act necessitated smuggling, false documentation, and what were referred to as "paper sons" - Chinese sons of American citizens, at least on paper.  Since Mike's grandfather Sam was not an American citizen at the time, this did not include him, but it may have affected some of the documents that were found for other family members.

Sam and his wife Rose set up a restaurant in Rock Springs, and later in San Francisco, building their own rich family history as American citizens. Sam petitioned to be a citizen in 1948, and became a naturalized citizen in 1950.

Thus explains why "Chin" is also "Chan" in the charts.

Another great challenge for me is that there is very little about Mike's ancestors on the net.  In essence, I am creating the database for his family, in Ancestry, Wikipedia, and other sites, so that others in his family - or future generations - can access that information. This includes data and photos.

When I added Mike and his American-born family members, my job became much easier.  Documentation is more available.   Though the Wong-Chan chart does not go back further than 5 generations, I am content to leave it at that.  It is a good start for future generations, considering the affects of our country's discriminatory practices had on Mike's ancestors.  My Irish family members faced their own discrimination two centuries ago, so it does seem to be par for the course. Once we are here...we are HERE.

UPDATE:  After 3 years of doing the "American Quock clan"  family tree, Mike's cousin had the idea to have a reunion of cousins - an event where everyone gathered and celebrated which was NOT a funeral or memorial. The event was months in the making.  On my part, I put together the main "Quock" family tree - the one which showed how the Tungs, Fungs and Wongs of our clan were related - and other trees that family might wish to have displayed.

The reunion party was a SUCCESS! I was thrilled that family members enjoyed viewing the charts on display, and an album of records, photos, and memorabilia. 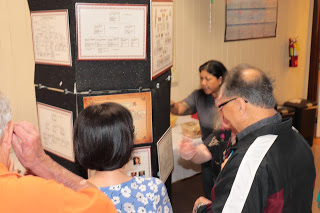 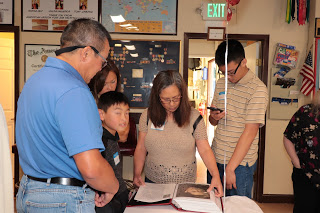 It felt like the culmination of all of that research and hard work was worth it!  I digitized the records, and put them on  USB flash drives for family members who might wish to have a jump-start their own family trees.  I kept the print of the Quock tree for myself, in bamboo-style frame, for my office. 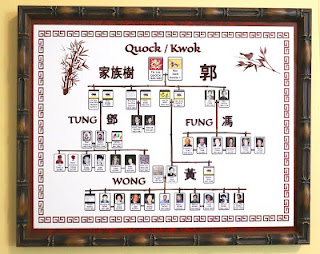 I think I'm now done with both family's genealogy projects.  Not that there isn't more to discover - but I want to leave that to the next generation, so they can have the fun of discovery.   Well, that, and the fact that my Ancestry.com subscription is about to run out! :)
Posted by Anonymous at 7:08 AM