Our car accident in 1963 made all the newspapers -  even as far as Bakersfield!

I was 11 at the time, and my mom was driving us to church. The car was a used 1951 Studebaker. I was sitting in the back seat, behind my mom; my sister Laurie was next to me, and our brother Arlo was in the front seat. No seat belts, of course. This was before seat belts were installed in most cars. Also, before shatter-proof glass in the windows.

I was holding on to a small stuffed leopard that I named "Leopard QQ".  I brought him everywhere with me, my own pocket-sized "pet".  For whatever reason that I have never been able to fathom, I blurted out: "This is the first time I've ever ridden in this car....and the last!" My sister seemed to think that was funny. Not sure why I said it, but it turned out to be prophetic.

We were on our way to church, and had just passed the first crest of Manor Drive, a steep, 2-mile-winding road. At that point, my mother pumped the brakes, and got no response.  She tried the gears, also getting no response. My mom didn't know anything about the overdrive feature on the car, which rendered the gears useless. She then told us, as we were hurtling down the hill, that: "we are all going to die, we need to say the Act of Contrition" (the prayer that Catholics say to get into Heaven, if they think they are going to die soon)*.  I was so terrified, I couldn't remember the words. I hoped that God would understand my intent!

Arlo was screaming his head off, looking towards the back.  He was expressing what we all were feeling! Laurie got on the floor, and I held on to the back seat.   Mom drove that car beautifully, dodging everyone and everything in her path, as that car took on speed.  Anyone who knows that road will understand what a challenge that was. On the way down, she hit not one thing...or person.

We hit the beach, flipping over, twice. I remember counting the rotation of the car as it flipped over. The sand helped to slow us down, which was a good thing, as the edge of the cliff was only a few feet away.  I don't remember emerging from the car.  I didn't realize that Leopard QQ wasn't with me, until later.

Miraculously, we all survived that accident.  Some people came out to put blankets over us, and called an ambulance. The car was balanced on its roof, not crumpled-up, but intact.  Gas was leaking, and someone told everyone to keep a distance.

"Mrs. Hagler shot through a green light at the traffic-congested Cabrillo highway. bounced through the shrubbery-along- the beach after which she' and the children were slammed around the inside of the car when it rolled over in the sand, and came to rest on a crushed top.  This was also the lucky day for two 14-year-old Sacramento girls, Marina Brumley and Linda Kline, who were missed by inches as it hit the sand.   Mrs. Hagler and son Arlo, 9, got out a window while the two girls, Debra, 11, and Laurie, 10, got out a door that had sprung, open. The car had lost a wheel, and gasoline was leaking.  All four were taken to Peninsula hospital where they were checked out, and released."

Mom had a cut finger, I had glass in my legs (still have the scars), along with bruises, and Laurie had to stay in the hospital for a few minor injuries. Arlo didn't even have a scratch. I guess his screaming helped!

Later, when the wrecking yard hauled the car away, they found Leopard QQ in the sand, and he was returned to me. I was comforted by their thoughtfulness. 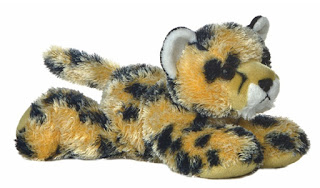 We never did make it to church that day, but were told that Father Gluszek said a prayer for us. Someone mentioned that the "miracle" had already happened. We were in church the next week, however, giving thanks. 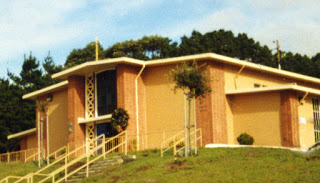 Here is a picture of our mom, Marie Hagler, and our family in 1963, just before that accident (and before our brother George was born) 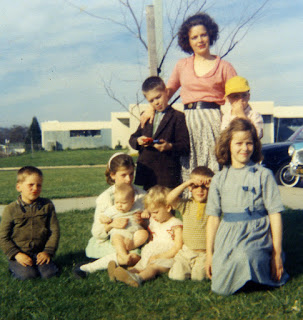 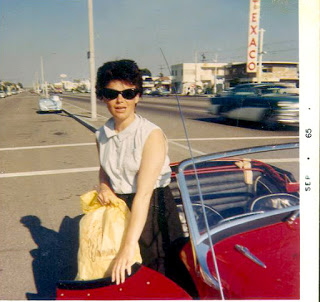 The last time I saw my mom was in 2008, to say goodbye.  She was in the hospital, and would pass away shortly afterwards. Among other things, I told her that she "drove like a champ" that day.  That put a smile on her face.

Here are a few of the news clippings of our crash. Some news reporters embellished for dramatic, almost tabloid effect: "Dame Fortune rode with the 31-yr-old housewife."  (San Mateo Times). "A Cannonball ride in a car..." (Oakland Tribune) "Mrs. Marie Hagler inched her wheezing 1951 sedan...."

There were also details which were not true - or, I guess important, about what we kids were doing or where we were in the vehicle, etc. The San Francisco Examiner had the most accurate reportage, and a great visual to go with it (click on the photos for larger images): 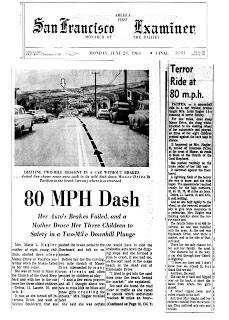 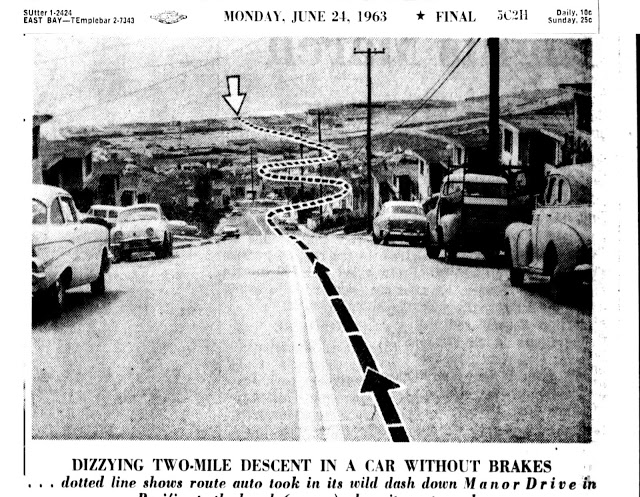 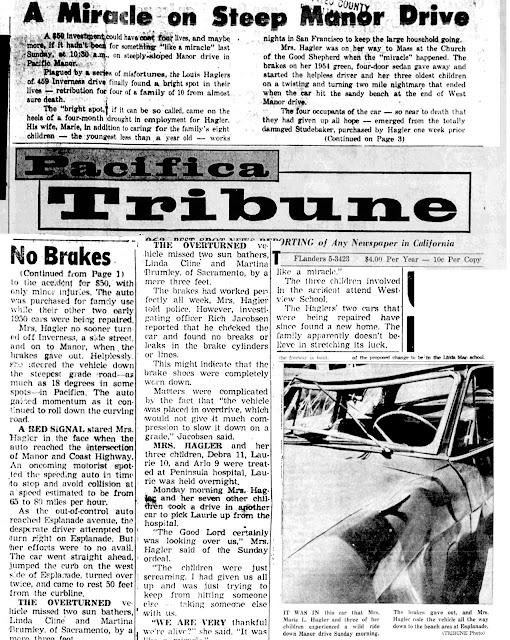 *ACT OF CONTRITION:
" O my God, I am heartily sorry for having offended Thee, and I detest all my sins because of thy just punishments, but most of all because they offend Thee, my God, who art all good and deserving of all my love.I firmly resolve with the help of Thy grace to sin no more and to avoid the near occasion of sin. Amen."
Posted by Anonymous at 12:56 PM