Last time I was drunk was in 1969.  I was 17, with two male friends, and I drank a whole bottle of Ripple wine.  Ripple and Red Mountain were the alcoholic beverages of choice back then. This was before Boone's Farm Apple Wine, and the other "soda pop" drinks.
I only have bits and pieces of memory after drinking that bottle, which was done partly on a dare by one of my friends.   In essence, I blacked out.   Just before the black veil descended, we were watching a t.v. show about Vietnam war casualties, some of it pretty graphic.  My friends were discussing how they were going to dodge the draft.

In any event, the next morning, my head felt like cement, and I was very nauseous, and have some memory of throwing up in the toilet a few times.

I was also naked, lying between my two - naked – male friends.  That I didn't forget.  When I asked them what happened the night before, one shook his head, and the other just smiled.

After that, I decided that if I were to drink, it would be no more than two glasses per day. Sort of a "wake-up" call.

Prior to that experience, I had one other drunken night where some memory is missing.  I was at a party in San Francisco, and had several cups of hot, mulled wine.....you know, with the orange slices floating in it, nutmeg on top.  It was deceptive, as it didn't seem like that much...but it was so good. Like dessert. I was also encouraged to have more, you know how that is?   "Have another glass - I made enough for an army!" said our proud hostess.

I was wearing a very short fringed suede skirt and vest outfit, with pigskin boots to match.  Very sexy for that time.  Long story short, one of the other guests, a long-haired hippie dude about 6’4”, picked me up, and said he wanted to "....show (me) the City."  I weighed about 90 pounds at the time, so it was do-able.  He carried me up to Coit Tower, because I couldn’t walk, at that point.  He had me look through one of those view-scopes to see the City through it, but my vision was cloudy, and all I saw was fog.   He tried to make out with me, but I was too messed-up to reciprocate, so he brought me back to the party, and my friends drove me home.  Apparently, I had fallen asleep with my mouth open, in the car.  One of my friends described me as looking like a: "...sweet little bird with its beak open."

My generation also had other forms of chemical recreation.
I tried pot, hash, and had mushroom (psilocybin) once. I wanted to fit in, but the effects didn't do it for me.  In fact, the negatives (paranoia, dizziness, nausea) made them not rewarding.  However, I enjoyed watching my friends partaking, and then laughing hysterically.


From 1971-2001, I didn’t drink alcohol, save for a glass of champagne once, for New Years, I think it was in 1999.  My first husband Perry didn’t want anyone around him who drank.  I went along with that. It turned out to be a wise decision for my liver.  When I got together with my second husband Mike, we went to many art shows and parties, where a glass of wine was offered & received (helped calm the nerves).

These days, when I do drink, it is two or fewer glasses, and not often. Last time was about 3-4 months ago. But I do enjoy that glass of red wine with spaghetti, pizza, or beef stroganoff.   I'll have a beer with Mexican food or fish 'n chips.  Just one. Burp!

A photo of Yours Truly enjoying a glass of Guinness also wound up in a book, in 2009. 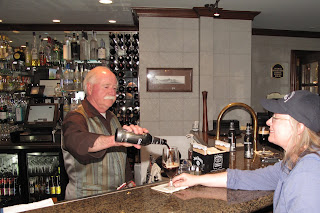 On rare occasions, there are family gatherings where a glass of spirits is included.  Then, there is the required drink at Malloy's Tavern, in Colma, after my mom's funeral at Holy Cross cemetery, where we all get together, and have one...or two... for Mom, of course. That also includes a sing-along, for those who are inclined. Much better AFTER imbibing. 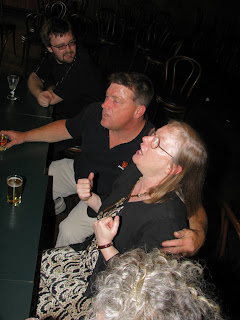 Now that I am 65, I think I have dodged a few bullets that I could so easily have caught, including the addiction to alcohol (especially with my family history).  There is still time, of course, for me to become a full-blown alcoholic.  But I really am not that motivated, and would rather spend $$ on other addictions.  Like books.
Posted by Anonymous at 7:43 AM