My brother Mark was born with autism, but that wasn't the diagnosis until years after his 1955 birth.  He was like any other baby. 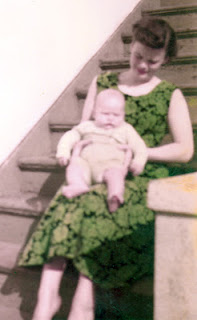 Later, when diagnosed, some of the "symptoms" of autism were there: hypersensitivity to light and loud noises, too much stimulation, etc.  But other typical indications didn't jibe.  Mark was always very affectionate, and enjoyed hugs.  He was always responsive to us, and sociable, and has always had a phenomenal memory. 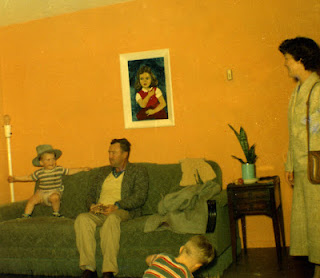 Mark is very aware of each and every person in his family, and later his caregivers and friends.  Here he is (white shirt), hugging our mom, with a few of his siblings (being themselves), for my Polaroid shot: 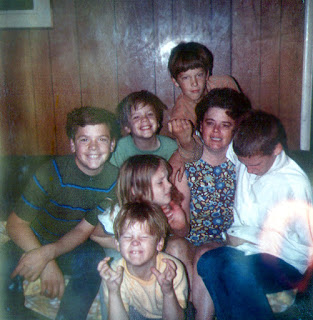 In fact, there are times when Mark can be TOO affectionate, as it involves strangers (mostly ample-bodied ladies), and Mark has been taught not to go up and hug people without their consent. This is an ongoing challenge.  :)
Mark lived with us until he was 6 years old.  Neighborhood kids noticed right away that Mark was "different".  The word: retard" was used to describe Mark, used as an insult: "Your brother is a REtard!"  Not that Mark cared what they thought, but we sure minded. That word got some of those kids beat up.

At a certain point, my parents realized that they couldn't handle Mark at home.   As it was, he almost killed himself, twice. 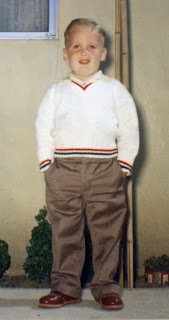 Mark's first hospital visit was when he was 3, after trying to swallow from a can of Drano that he had found under the kitchen sink. My mom rushed him to the hospital, where, luckily, it never passed his lips, which were permanently burned by the caustic Drano. 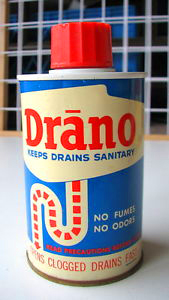 Mark's next trip to the hospital was more serious. He was 6 years old, frustrated and angry.  He smashed his arm through a window, cutting up the length of it, requiring stitches.  After that incident, he was moved to Napa State Hospital.  I'll never forget the first time my mother and I went to visit Mark at Napa State.  We found out that Mark had bitten off the top of his index finger, apparently because he couldn't feel it. Mom was freaked out.  The hospital's medical staff experimented with medications and therapies, to keep some of the behaviors under control.

Even though he lived at Napa State full-time, Mark did come home for week-long visits during Easter and  Christmas vacations.

Mark was the best escape artist of us all.  How he did it, I still don't know, because we tried our best to keep a watch on him.   Mark took off a lot, often winding up around Skyline Blvd., the police finding him, and bringing him back home.

It was difficult keeping an eye on Mark all the time.  My sister and I were charged with his care (being the two eldest), but we ourselves were only a few years older than him.  Mark was also physically strong, so it took two of us to hold him down.  That wasn't always possible.  My father ruled with an iron hand, and tried to keep us all in line by having us keep our arms folded, when not in use.  That worked o.k., until our family expanded to nine children. 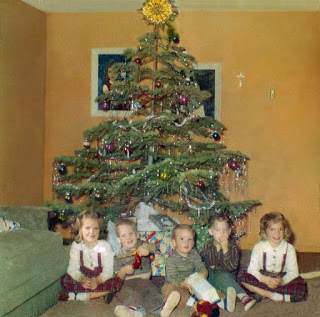 Mark enjoyed turning off our neighbor's power at the outside switch-boxes on their homes; he was a genius at figuring out how to get into those locked switch-boxes!  You can imagine that this didn't make us very popular with the neighbors. 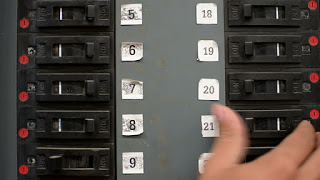 The neighbors across the street, the Millers, and a lady down the street named Vera were particularly vocal, critical that such a large family could even exist (I constantly heard the neighbors criticize my mom for having so many kids).  The Millers had a beautifully-kept home, so probably were worried that their property values would go down, being situated so close to the Hagler "Animal House" across the street.

Mark was regularly compelled to visit our neighbor's homes and use their water hoses, spraying those around. 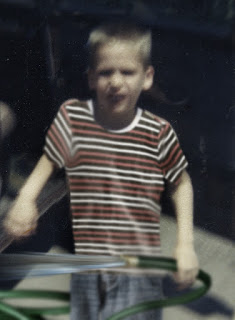 On one momentous day, the Millers were having a party, all of their guests dressed up.  Somehow, Mark left the house without our realizing it. We heard a shriek from across the street, and saw Mark holding a hose, turned on full blast, right at the Miller's picture window. The Millers and their guests were peeking out that picture window, horrified.  That was one of the occasions when Mrs. Miller would march over to our house, and have a yelling match with my mom.  I remember them out in the middle of Inverness Drive, screaming at each other, embarrassing my sister Laurie and I. 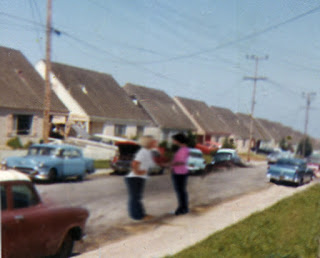 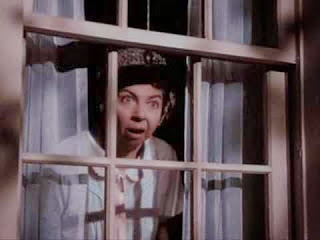 I still don't know why Mrs. Miller would object to Mark's washing her windows.

Mark also liked to throw things over the fence.  A lot of stuff wound up in our neighbor's yard.  We used this to our advantage, when my father told us to go find a stick in the yard, for him to beat us with.  We'd look around, then give each stick to Mark. Over the fence it went! 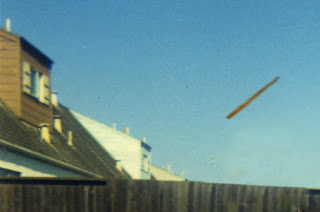 Of course, that didn't help in the long run, since our father always found something to beat us with.

Our yard had naturally-growing sweet peas and strawberries, which we scavenged for, as there was never enough food. But Mark was a meat-eater.  He ate snails, and threw away the shells.  If it grosses you out to read that, just imagine watching this happen. "Mark! leave that poor snail alone!"  I'm wondering if Mark just took after our French ancestors.

After a disastrous experiment in community placement after his years at Napa State Hospital (part of then-Governor Ronald Reagan's releasing of mental patients to save the state money), Mark broke into houses, and almost killed a little girl (he hit her over the head with a 2x4 piece of wood).   The girl's parents threatened to sue the state, if Mark wasn't locked up again, so he was brought back to live at Napa State Hospital.

During that time, he participated in Special Olympics, and won ribbons for running. He was great at running (and escaping; during one event, he gave my sister Sue and I the slip, when he went to use the restroom, and we had to chase him down).  Here he is before he took off: 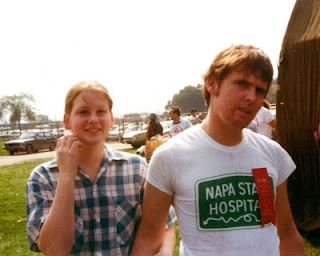 In 1986, Mark was moved to live at the Sonoma Developmental Center, where he has lived for decades. For years, our brother Arlo visited Mark there, sometimes with our mom.   The family joined in on many occasions, as well. 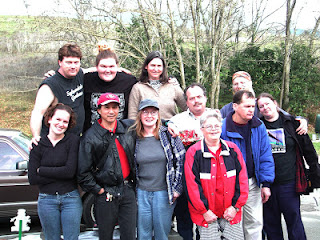 Mark never lost the urge to try to run off.  Just before Mom died, she asked that we continue to visit Mark, and to look after him.  We promised that we would.  I became Mark's Conservator, with two sibling "back up" conservators,  Susan and Tom.

Mark's concept of death is partly based upon the absence our father, who stopped seeing him, after awhile.  When Mark would ask us: "Where's your friend Dad?" we would tell him that his father  couldn't be there, that he was "...in Washington".    When the inevitable passings occurred, and Mark asked, we'd say that they couldn't be there, and Mark would conclude that they were also "...in Washington."

When we visit Mark, we all take him out to the Black Bear Diner, in Sonoma. This is part of the annual tradition.
Mark loves chocolate milkshakes - in fact, he always orders two...and finishes them! 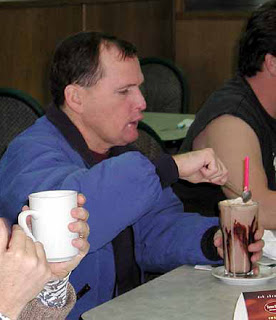 Then we go on a "candy run" at CVS Pharmacy, before we attend the annual meetings with his caregivers. Mark is very particular about the candy he buys. We must surround him at all times, because he does like to escape.  We also have our gifts for him, since his birthday (and Christmas) coincides with the meetings. 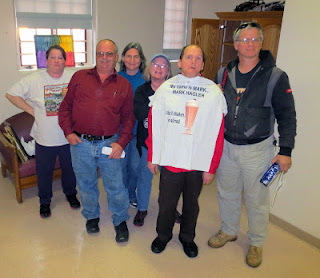 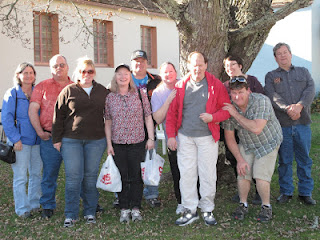 Once we return to SDC, the candy is stored away, and rationed out through the year, to Mark and his friends.  He always attends the meetings, and provides input about his care. He has progressed a great deal with the care that he has gotten at SDC.  He has learned to write his name - a huge accomplishment.


In 2017, the Sonoma Developmental Center closed, so the residents had to be moved to group homes and Regional Centers. We were lucky when Dr. Dale Liete offered a place for Mark in one of his group homes, with 3 of Mark's favorite roommates.   He is very happy there, with many activities, and his own room.

The house he lives in looks like a "standard house", though has many modifications in it, to make sure that Mark and his roomies are secure.  We stay in regular touch.  Mark is now 62, a senior citizen - and that home is his retirement home.  This is a very happy ending - actually beginning - for our brother Mark!