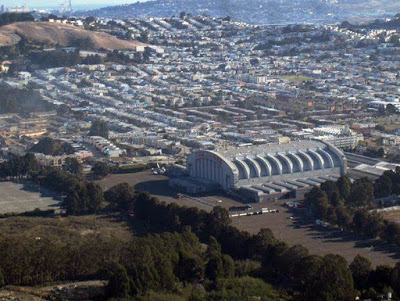 The Cow Palace was a popular venue. Through the years, I attended many concerts, rodeos, fairs, the circus, and the Sports and Boat shows there.  Other types of events, including gun shows and religious and political conventions, have also taken place at the Cow Palace. 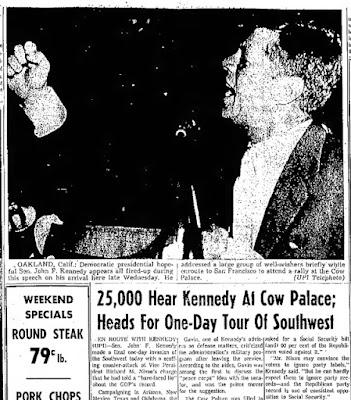 Part of FDR's WPA Project, the Cow Palace was completed in 1941. Owned by the State Food and Agriculture Department, The Cow Palace was often described as a "Manure Mound" and "Goat Herd Barn", but was initially proposed as a livestock and sports pavilion.  The name "Cow Palace" was conjured up by San Francisco News reporter R.W. Bennie Horne in 1933, as a joke - and it stuck. You can read more about the history of the Cow Palace here.

I never did get to see the Beatles when they performed at the Cow Palace, and was quite jealous that my friend Patty Pointer got to go to their concerts there in 1964 & 65. 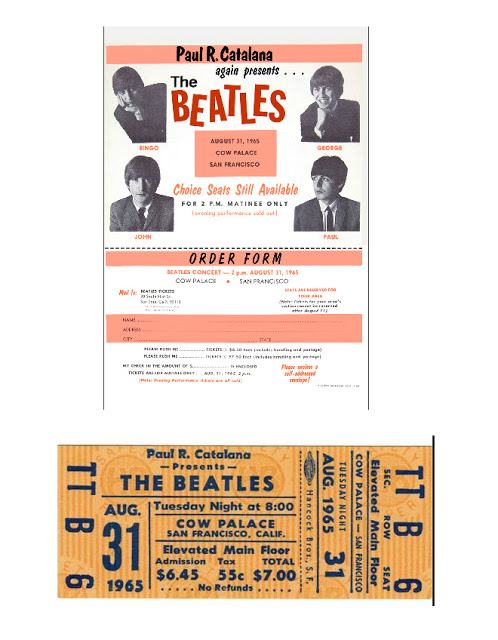 Adults by and large seemed horrified by the Beatles, which was one of the great divides of the generations.  Adult opinions at first thought that the mop-top quartet was a brief fad, and that the Beatles were a "bad influence" on American youth. 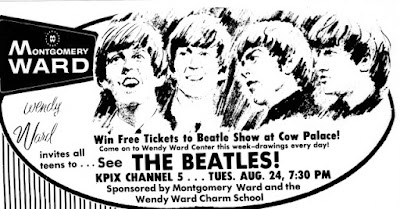 In 1964, a riot broke out at that concert, one that Brian Epstein, the Beatles' manager, described as "The worst on the tour".  Not the ONLY - just the WORST.  Well, of course, pandemonium was the result of all Beatles concerts, back in the day.    That didn't stop the Fab Four from returning to the Cow Palace for another riot...er....concert... a year later. 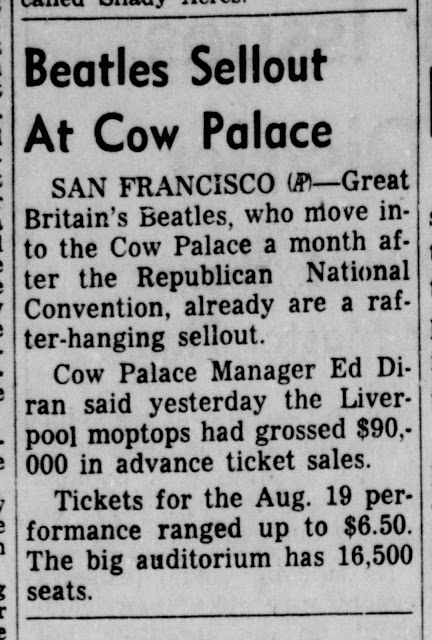 The fans didn't seem to mind, even when being rushed to the ER at Peninsula Hospital for riot-related injuries.  The Beatles were WORTH it! 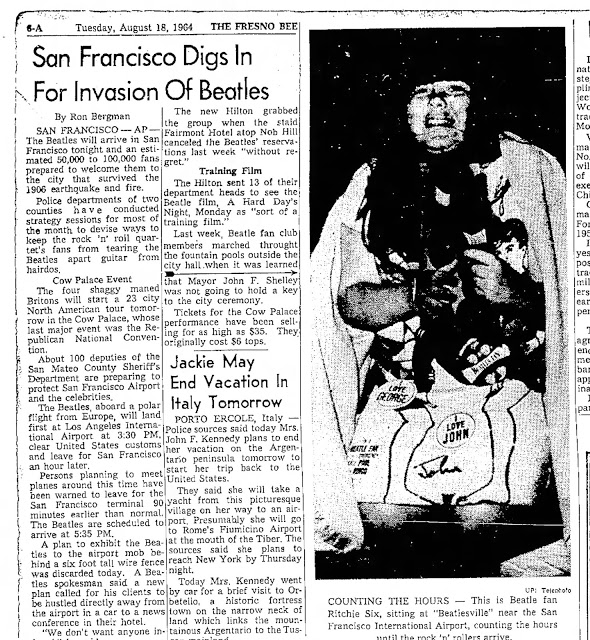 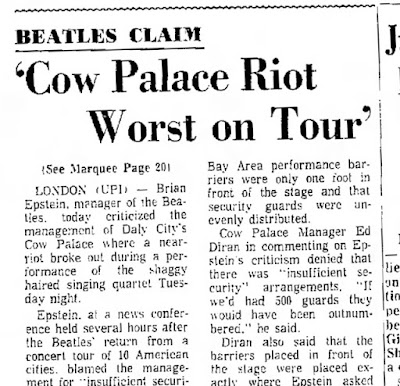 In any event, Patty talked about that concert  FOREVER afterwards....our friends and I hung on every word.  She liked George the most, and we all picked a Beatle we wanted to be, when performing their songs on our grade-school stage - or out in the schoolyard! Patty adopted an English accent, as well. 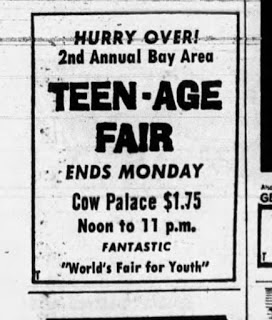 There was music, demonstrations of all sorts (I remember that we spent a lot of time at the makeup booths, and brought home lipstick and Clearasil samples), and sales of a multitude of items. 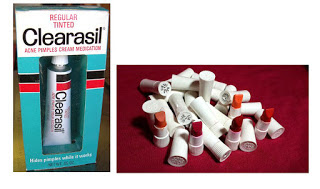 We voted for "Miss Teenage Fair", and there was a youth poll with questions about dating, religion and government. 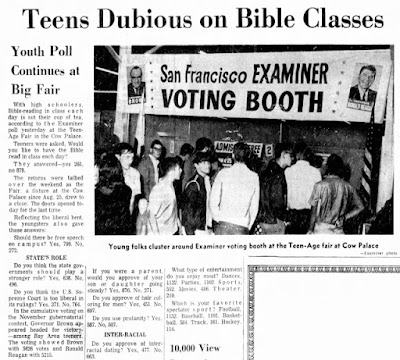 There were also contests involving games.  Hasbro had a booth set up, demonstrating the very first Twister game, and was inviting brave souls to try it out. We were pulled in. 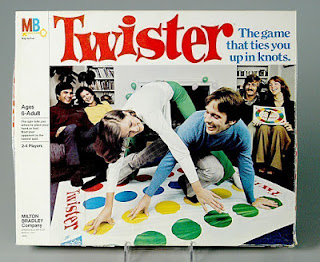 Problem was, I was wearing a tight dress...it was a royal blue dotted-swiss knee-length affair. I threw off my high heels, and joined the group (there were 6 of us).  I was cursing dressing up for the fair.  We both were unprepared for this game, to say the least. 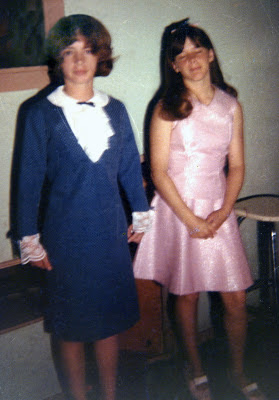 At first, Twister was easy...left hand red; no sweat. It got complicated when I had to put my right foot yellow diagonally under another person's crotch. It made matters worse that this other person was a CUTE GUY, and I have always the habit of going all red in the face ...he appeared a bit nervous...he was laughing. He had a Beatles haircut, which was all the rage back then. So, to make the move, I had to hike my dress up to my crotch,and slllliiiiideee my leg carefully under and between the young man's legs.

I was embarrassed as hell, because a large crowd had gathered around us, and we all felt "on the spot" as it were.  When I noticed the young man's eyes wandering over to my rear end, I decided to fall out. The game wasn't worth it.

That was the only Teenage Fair that I went to.  By 1966, we had gone on to other things.  I was more into the hippie thing, hanging out in the Haight with my friend Chaz, a couple times with Ron McKernan -  "Pigpen" - of the Grateful Dead, and participating in peace marches and Love-Ins, etc.  Laurie was involved in more projects at school, etc., even trying out for cheerleader, and was a straight-A Honor Roll student.  Our paths had diverged.

Years later - 1987 - my first husband and I took our daughter Kelly to see Depeche Mode at the Cow Palace.   It was my first experience with "stadium seating". If we had been smart, we would have gotten our seats RIGHT AWAY. Instead, we all went up to the front - we were early, so that was possible.  Hung around there for an hour, and then - the floodgates opened, and a teeming mass of humanity poured our way.  My husband and I were crushed by the crowd, but at least Kelly was held aloft on the shoulders of a kind gentleman. We eventually escaped, finding a few leftover seats on the left side of the venue - behind a post!   Oh well, the concert SOUNDED great anyway, and Kelly was happy. 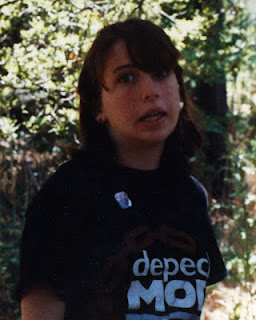 The last time I visited the Cow Palace was in 2017 for the Dickens Fair with my husband Mike and our friends Randie and Karl,which was a great deal of fun. 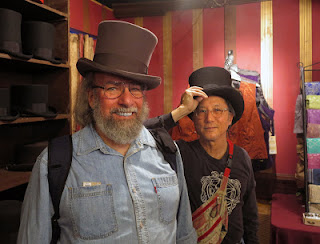 For 77 years, the Cow Palace has hosted hundreds of events, which I think earns the venue - even with all of its issues through the years -  a measure of RESPECT!
Posted by Anonymous at 12:58 PM