There was a question recently about whether Duran Duran belongs in the Rock & Roll Hall of Fame.    Fame.http://www.mercurynews.com/2017/07/08/vote-now-does-duran-duran-belong-in-the-rock-and-roll-hall-of-fame/ 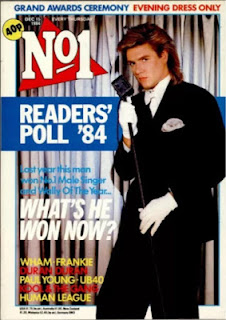 It brought to mind the one Duran Duran concert that my first husband (James Perry Peeples) and I attended, with our daughter Kelly. I found this letter that I wrote about that 1984 concert, among those that I am archiving for my sister:

"I said I'd write and tell you about the Duran Duran "The Reflex" concert.  Since there's so much to tell about, I have to type this, single-space, on big paper.


The concert was schedule for tonight, but when I called the Oakland Coliseum, to ask about parking costs (2.00), and when would be a good time to get there. "NOW!" was the response, so we had to endure a 6 1/2 -hour grueling wait (our seats were general admission, first-come, first-served).

It was 11:00, and we got there at 11:45 AM.    There were already about 300-400 people waiting in line. The only good thing to come of this arrangement was that we got excellent seats - we could see the band very well, and with binoculars, we  could, if we wished, see Nick Rhodes' nose-hairs.(UGHI)
The bad news is that absolutely NO cameras were allowed inside-made more galling by the fact that our seats were so good, and---the fact that we were SEARCHED - not once, but several times, before getting in. One burly guard asked me what was in my parka pocket - very suspicious---and I pulled out my S.F. Giants' cap!  He appeared deflated after I had done that.
The show itself, if you cut out the constant screaming, fainting spells of a great many on the 'floor, and the general lack of consideration by the fans for anyone but themselves, was excellent; I have to admit that Duran Duran are an extremely dynamic and charismatic group, in person. You'd be surprised how appealing they can be, which was, unfortunately, part of the cause for the general misery before the program. 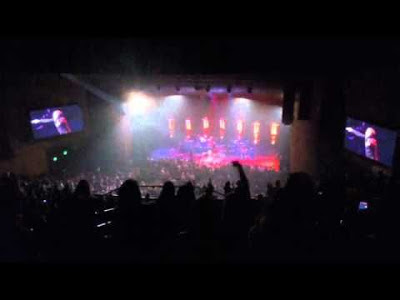 I especially liked Simon LeBon's performance in the finale, where he picks Andy Taylor up off the floor, upside-down, while Andy plays the guitar riff to "Girls on film".    Huge balloons were kicked out by the band during the encore, "Rio", and a lot of other colorful special effects almost made the day's misery worth it all  (of course, to Kelly, it was not only worth it all, but she wants to do it again). "Not on your life!!!" we said, simultaneously, feeling quite nostalgic for all those "civilized" concerts we used to attend.)
Nick Rhodes and Andy Taylor were closest to where we were sitting, though Simon was all over the stage, as he admirably, and very deftly dodged the multitude of stuffed bears that had been thrown onto the stage. 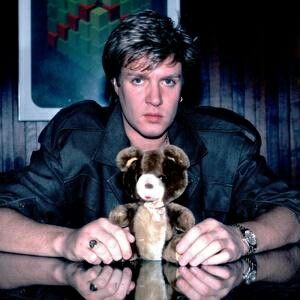 I remember the sticky situation when the Beatles had had to perform through a floor covered in jelly-beans. If you've seen their filmed performances, you'll notice that they hardly ever moved from the spots they were in; they were probably glued to the floor with jelly-beans!
I came away from the D.D. concert loving the group, and hating the fans. DD  are definitely a great live band.  I also came away from the concert with ringing ears, which persist today. On our way home last night, Perry kept asking, "Do you hear sirens?"

At the concert, Kelly screamed herself hoarse (she had to bring a note to school today, explaining that her voice is out of commission.) She really enjoyed herself, and according to her, "..the best concert of my life", so that there should be no doubt as to how much we love her, since we went through a lot of misery so that she could realize that dream. We won't be going through it again, however; NO group is worth dying for.  In the midst of the crush, Kelly agreed that no group was worthy of dying for, but changed her mind once the group bounded onto the stage.

Matters were exacerbated by the fact that I was having the worst day of my period at the time (don't want to gross you out with the details, only to explain my abject misery). I felt very tired and faint throughout the proceedings.

Kelly and I had had to walk about a mile, before finding a restroom; a lot of kids were also looking for restrooms; Kelly and I were able to get into "Sam's Hofbrau", only because I was over 21(I never felt so glad, and so relieved, to be 32 years old!), since there was a bar in the Hofbrau. "

I also  hadn't eaten all day, which didn't help matters. That food smelled GOOD!  Kelly got a lot of compliments on her hat & buttons, which she was happy about. 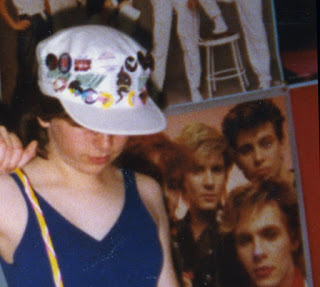 There weren't very many parents there; many dropped their kids off, which was a stupid thing to do, especially the potential dangers involved(ambulances arrived continually, carrying off the unconscious). There were also a bunch of con-artists who were trying to bilk people out of their money with card-tricks; they came over to me, and I gave them my withering stare, which got rid of them plenty-quick. I found this stare to be quite useful, being somewhat surprised that people were so intimidated by that look. It also came in handy when push came to shove several times.

Another incident that made me angry, was that once inside, a woman asked to borrow our binoculars, to locate her kids, who were out on the floor. We were kind enough to oblige, but after about 20 minutes, she was still using them, drifting further away from us, when I reached out, and took them out of her hands, saying "We'd like to use our binoculars, now - and gave her the withering stare. She was saying: "My kids are out there on the floor- and I said, "WE made sure that OUR daughter stayed with US!"

The stupidity of the parents who allowed their kids on the floor was magnified by the fact that there was little they could do when their kids might faint,hyperventilate, or be crushed. It was chilling to see how many bodies were passed to the front, and how the crowd crushed forward, like a giant amoeba.

We saw Paul Kantner (of the Jefferson Airplane/Starship) in the special reserved section, with God/China, his daughter by Grace Slick. Perry was way more interested in that, than anything else.   "Paul Kantner just got up", or "Paul just went to the restroom!", or "Kantner just left during the performance of the "Contractions!" (an all-girl group that sounded lousy). 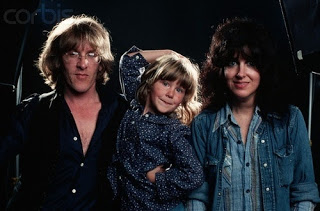 Perry said: "I wish the Contractions would hurry up and have the baby already!", but we both thought that the constant booing of the fans toward them was the height of classlessness.

One girl behind us kept screaming "Simon!!!  AAGHHH  Simon!", and we kept wishing we could send her down to Simon.

Kelly was really very good - we have a good kid! I blame the management of the Oakland Coliseum, and the arrangers of the concert for the miseries of the day; a lot of that to do with the "general admission" idea. "  Much wear and tear could have been avoided with reserved seating, and could've made the experience a fun and enjoyable one.


We are left with sunburns and ringing ears; Kelly got a (5.00) program, and lots to talk about (looks like I do, too), so it wasn't a total loss. I'm thinking of having buttons printed up: 'I survived the Duran Duran concert!'"

Postscript:   I wrote an angry letter-to-the-editor about that concert's management, published in the San Jose Mercury News the next week (see below).  However.....we didn't keep to our word: We attended a Depeche Mode concert at the Cow Palace 2 years later, that made this concert seem like child's play!  That's a story for another blog.......
Posted by Anonymous at 12:19 PM