It’s Yard Sale Season again! This time of year gets me nostalgic for those Saturday morning cruises for bargains that we took for so many years, in my quest for products to sell on eBay.   Pacifica and the Coastside had a lot of treasures in those garages. We especially enjoyed the pack rats, those hoarders who finally had to let go of part of their stash, for cash.

Think of it: all over the country, there are treasures hidden in garages and storage lockers that even the "Pickers" crew haven't yet unearthed! This is an ongoing American dream.

Some sales are neatly set up, and organized.  This one in Pacifica made it easy to peruse the merchandise. 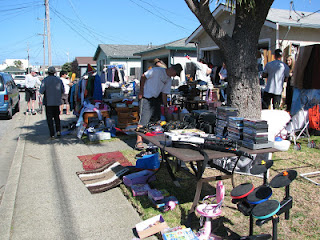 Some sales are slightly less organized. 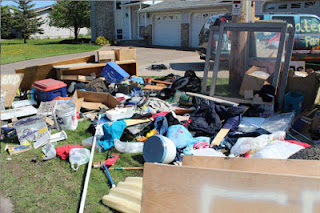 A few sales reek of bitterness or urgency. 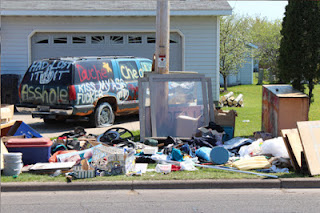 We didn't care, as long as there were DEALS. You can't get too emotionally involved.

I have always loved thrift stores, garage sales, yard sales, rummage sales and flea markets. Years ago, I worked for a large thrift store in Redwood City, which is now called "Savers". That was sort of a dream job for awhile.

The huge variety of items which came in each day, in addition to the interesting people who shopped there, is worthy of a book in itself. 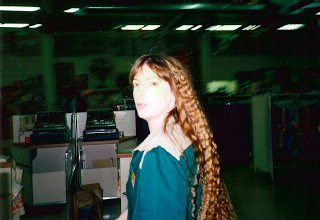 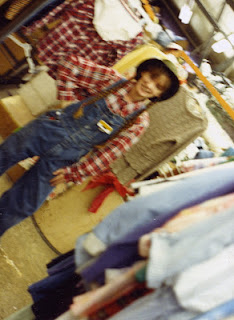 With that experience, embarking upon my eBay business in 2001 seemed like a natural occupation for me. My eBay name is “Not_New_But_Cool”. I always included  my card, with each item that I sold. 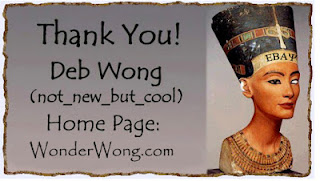 My husband Mike and I would get out early every Saturday morning, so that we could beat the “early birds” in finding the best deals on what we thought might sell.  There would be signs on every corner - some were quite eye-catching. 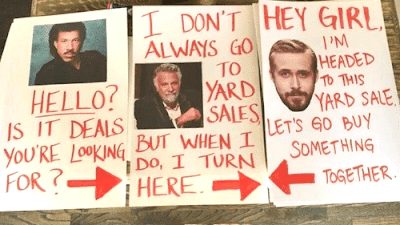 Tip for buyers: Always bring small bills. The sellers will appreciate it!  Be courteous.  If the seller says: "No Early Birds" respect that (though Mike will often point out that a few who ignored that rule were the first to get to the good stuff).

Well over 4,000 positive eBay feedback ratings later, I can say that our success stories stand out, while our failures are swept under the second-hand throw-rug of “experience” and “lessons learned”.   In reality, if you count all of the hours I put into it – just after returning home with the goods – I was making about $1.00 an hour.


What I learned about the things I was selling was a real education, and it was also great practice for product photography.

Our living room is like a huge light box, windows on 2 sides, filtered light, and great for time exposures. Our camera was hooked up to our television set, which was a useful monitor. This experience has proved invaluable for when we do product photography for clients these days.  Using a large mirror for highlight & shape, we could make the items stand out over so many of the other images on eBay. 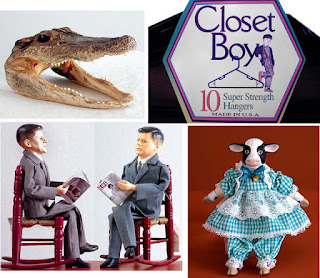 Some of the things that we found were slightly bizarre. Ranging from a petrified crocodile head to JFK doll, to campy logo "Closet Boy" hangers, with appropriate image.
When money was scarce, I even sold a few of my own collectibles.  This included a hand-written letter from May Pang, who was Beatle John Lennon's gal-pal for a few months. That went for a couple of hundred dollars. 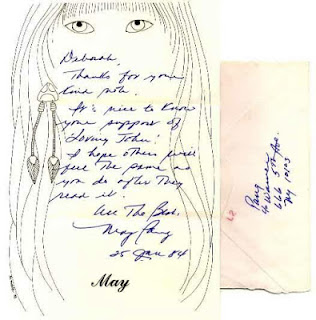 Learning how to package items safely, and creatively was part of the job.  Mike & I would go “dumpster diving” for cardboard boxes, to save money. We learned that bubble wrap is like gold. At one yard sale, I found a lot of it lying around, which the person who was having the sale was happy to give to me. Packing with newspaper is not ideal – too heavy, and things would break.


Dealing with bidders /buyers on a daily basis, I learned how to write up honest but provocative and factual listings. I always provided positive feedback when paid. Of the few times I gave negative feedback, it was earned, and served mostly as a warning to other sellers about certain bidders. That was in the minority, though. Now sellers can’t leave negative feedback, which takes away some of the seller’s options. That is one of many reasons that I don't sell as often on Bay anymore. 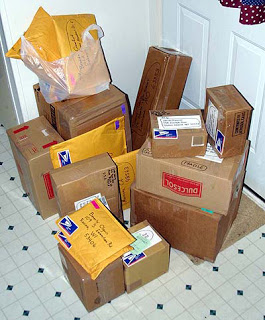 Pet peeves of garage sale customers: People who leave last week’s yard sale signs taped up, thus faking us out, and wasting our time. There are only so many sales you can go to within the golden hours of 7-10 AM. Luckily, most of the time, a practiced eye can detect a weathered sign from a block away.

Other gripes: Folks who hold yard sales, and wind up not wanting to part with their stuff, after all. Or those who price their items higher than the market would bear. Irritable persons who would snap at you if you tried to bargain. We figure that bargaining is a part of it (certainly part of the fun of it).   We have seen a few fights break out, at these sales. There are things that you learn after awhile – that “Estate Sales” are basically held after someone has died.  These often do not offer "bargain" items, but you can never be too sure.  The "Estate" could be anything from a mansion to a trailer. 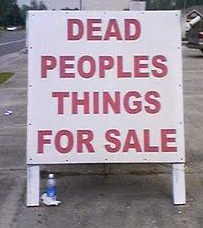 Estate sales usually mean higher prices, and are often not worth it. That being said, some of our best selling items came from estate sales. You just have to know how to shop, and have at least a rough idea of what was trending. The variety of items we sold surprised even us, as we never know what we would find each week at those yard sales. That was the most fun of all...the surprises! 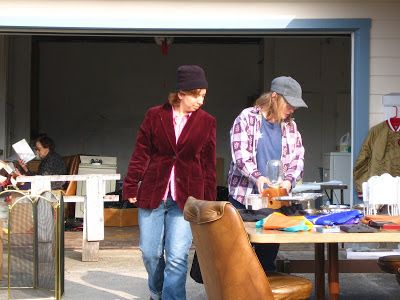 Every week, we would see many of the same people at the sales (and they would see us). Some earned nicknames. There was the schoolteacher we called “The Book Man”, for obvious reasons....always gravitated towards the book pile. There was the “Stuffed Animal Lady”, whose car was filled with plush toys. There was also “The Junk Man”, who bought machine parts and repaired them. You could tell the folks who were buying to resell, and the ones who were in it just for the fun of it, just by the intensity of their demeanor.


I really enjoyed the citywide yard sale days.  Pacifica’s day for that is different than Half Moon Bay’s, so that we had two such days in the year to look forward to. Since everyone is having sales those weekends, prices are generally lower on stuff, as there is so much to choose from, and sellers know it.  Bargaining is an art. Part of it is like playing poker - if you see a great find, you don't let on.

We learned to pay more, however, for “Benefit” yard sales, those which donate the proceeds to a charity or cause. We don’t even attempt to bargain on those ones. There are certain ones we never went to, as we knew that they would be overpriced, and not for the resale-resale market. People often asked me what I sold. “Anything and everything”.  If that is too vague, I’ll specify some of the more memorable items:
* Vintage books & magazines * All sorts of housewares, including vintage appliances; * An original Macintosh Computer, with case & accessories, that I got for $5. at a garage sale in Pacifica, and sold for $850.; * An antique wooden Madonna that I bought at a yard sale in El Granada for $2., and sold for $325.;*Film CAMERAS  - lots of cameras! We even sold Mike’s old Hasselblad, when he switched to full digital photography; *A vintage model race car that Mike picked up for $1., and sold for over $200.; * Handbags:  Dooney & Bourke handbags that I bought for under $5., and sold for between $50. – $200.; *Vintage electric Farberware grills, which used to bring in good money. * Collectibles of all sorts, too large a variety to even list.
But everything has a trend, and when we purchased a dozen Farberware grills during one of our last yard-sale runs, we couldn’t get rid of them. Timing is everything in the buying and selling on eBay business. That timing includes which day of the week you start an auction, as well as the time of the auction. Holidays are a mixed bag.

Once we tried selling items twice and failed, we donated those items to our two favorite local thrift stores.  One is the Alternative Thrift Shop, located at 522 Plaza Alhambra, Ste D, El Granada, CA, run by Cindy Judkins. 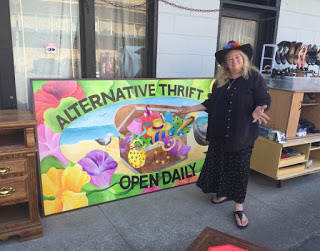 My most lasting garage sale purchase was something that I kept: a Hoover Vacuum cleaner, fully-equipped, for just $5, from an over-packed garage. The seller just wanted to get rid of stuff!  That vacuum cleaner has worked beautifully for 12 years, now.  It truly sucks - and sucks hard....which is what you want in a vacuum cleaner. In 2009, when our gallery moved to Main Street, I quit the eBay business, and went to work full-time at Spring Mountain Gallery, where I am now co-owner. We are too busy these days to take that time out for yard sales. But I do miss the fun of the find, and the art of the deal.
Posted by Anonymous at 4:55 PM